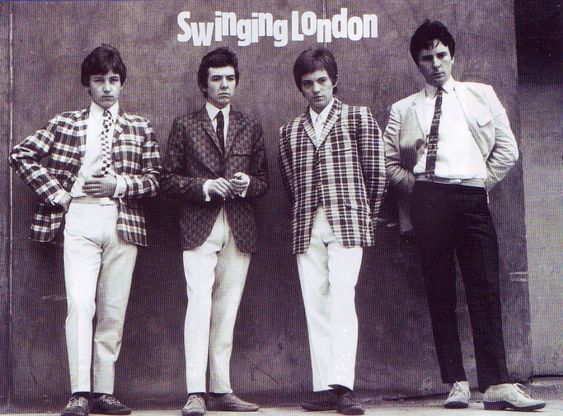 Small Faces - with Jimmy Winston 1965-1966 Swinging London -photo credit
​​Three of the tracks had been released prior to the album. These are the two aforementioned singles "Whatcha Gonna Do About It" and "Sha-La-La-La-Lee", along with the track "It's Too Late" which was issued as the B-side of "I've Got Mine", the group's second single, released in 1965. The band's fourth single "Hey Girl" was released around the same time as the album; ultimately it was not included and can instead be found on their 1967 compilation album From the Beginning.
In 1962, Muddy Waters recorded "You Need Love", written for him by peer Willie Dixon. "You Need Loving" is a thinly veiled cover of "You Need Love". The Small Faces were never sued by Dixon, even though "You Need Loving" only credits Ronnie Lane and Steve Marriott as writers. "Own Up Time" was incorrectly titled "Own Up" on initial pressings from 1966, on newer issues of the album the initial name has been reinstated. Guitarist Jimmy Page (initially of The Yardbirds and later of Led Zeppelin fame) used the Small Faces' arrangement of "You Need Loving" as the basis for Led Zeppelin's hit song "Whole Lotta Love" in 1969
​Singles from Small Faces - Small Faces (1966)
Additional releases of Small Faces - Small Faces 1966 debut album (not complete)
​The album was first released on CD in 1988 by London Records. This edition included four bonus tracks taken from three singles B-sides and one A-side; "What's A Matter Baby", "I Got Mine", "Grow Your Own" and "Almost Grown". 15 of this CD's 16 tracks were in mono, the exception being a stereo mix of "Sha La La La Lee".
It was first remastered for CD in 1997 by Deram Records, and this time the bonus tracks were alternative versions of "Shake", "Come on Children", "What'cha Gonna Do About It", "Own Up Time" and "E Too D".
In 2006 a "40th anniversary edition" with 23 tracks was released by Decca. Included were the Singles A-Sides and Singles B-Sides from that period, "What's A Matter Baby", I've Got Mine", "Grow Your Own", "Hey Girl" and "Almost Grown".
In 2012, a 2-disc Deluxe Edition was released featuring outtakes, non-album singles and alternate versions and mixes, and the remastering and overall reissue was overseen by surviving band members Ian McLagan and Kenney Jones.
Small Faces' Small Faces (1966) Deluxe Edition has 14 extra, stunning tracks:
-Come On Children [Alternate Version]
-Shake [Alternate Version]
-You Better Believe It [Alternate Version]
-It's Too Late [Alternate Mix]
-Sorry She's Mine [Alternate Mix]
-Own Up Time [Alternate Version]
-E Too D [Alternate Version]
-I've Got Mine [Alternate Mix]
-Grow Your Own [Alternate Mix]
-Sha La La La Lee [Stereo Version]
-Don't Stop What You're Doing [Alternate Version]
-What's a Matter Baby [Alternate Mix]
-What'cha Gonna Do About It [Alternate Version]
https://www.oldies.com/product-view/37116O.html
​Further Small Faces - Small Faces 1966 bonus tracks information:
https://forums.stevehoffman.tv/threads/releases-prior-to-small-faces-deluxe-sets.388745/
Listen to Small Faces Small Faces (1966) on your favorite streaming site!
https://udiscoverap.lnk.to/small-faces
Small Faces Live
Small Faces - Debut at the Marquee
March 22, 1966
~Ian McLagan and Kenney Jones interview clips at 3:12
Watch Small Faces Videos
https://www.youtube.com/playlist?list=PLav1VD-pQ_JW3QYj9M00sQ82W28cISC_C​
To purchase or otherwise stream Small Faces - Small Faces 1966 debut album visit:
https://www.udiscovermusic.com/artists/small-faces/#Small-Faces-Deluxe-Edition
Sources:
https://en.wikipedia.org/wiki/Small_Faces_(1966_album)
https://www.allmusic.com/album/small-faces-decca-mw0000653037
Small Faces – 11th biggest selling artists in 1966 – Steve Marriott – All Too Beautiful Biography, p. 111.
​https://www.discogs.com/Small-Faces-The-Small-Faces/master/304383
​https://www.udiscovermusic.com/artists/small-faces/
https://musicbrainz.org/release/6e06d1d5-db96-4d6c-a329-9843524f7d39​
http://www.wappingwharf.com/winston.htm
https://www.goldminemag.com/articles/the-small-faces-story-was-just-one-chapter-for-the-band