Small Faces Single - "Hey Girl" (1966)
​This page is a work in progress
​Small Faces Single Hey Girl 1966
"Hey Girl" was the fourth song single release by Small Faces.
Small Faces - "Hey Girl" video and lyrics
​written by Steve Marriott and Ronnie Lane
"Hey Girl" was released on May 6, 1966 with the B-side "Almost Grown". ​
The song, written by Steve Marriott and Ronnie Lane, was a compromise between the band and their manager Don Arden, as Arden wanted a very commercial sounding song.
Less than a week later the group's debut album Small Faces (1966) on Decca hit the UK charts, reaching number 3.
​​Three of the tracks had been released prior to the album, "Whatcha Gonna Do About It" and "Sha-La-La-La-Lee", along with the track "It's Too Late" which was issued as the B-side of "I've Got Mine", the group's second single, released in 1965.
The band's fourth single "Hey Girl" was released just days before the album release. Ultimately it was not included and can instead be found on their 1967 compilation album From the Beginning.
​The single made its chart start at No.23. Within two weeks, it was starting a two-week stay at No.10, while Small Faces enjoyed no fewer than five consecutive weeks at No.3. The LP spent 12 weeks in a row in the Top 10, through to August. By then, the quartet were about to enjoy their ultimate singles success, as “All Or Nothing,” another Marriott/Lane original, went to No.1.
"Hey Girl" was the band's firt self-written hit.
After the success of "Hey Girl" an employee of Robert Stigwood's management company contacted the band to see where they stood. When Don Arden found out, he, along with four "heavies," visited Stigwood's London offices and Arden hung Stigwood by his legs from a balcony window and threatened violence if he interfered with his bands ever again. The story would become common knowledge around the music industry, cementing Arden's tough man reputation. 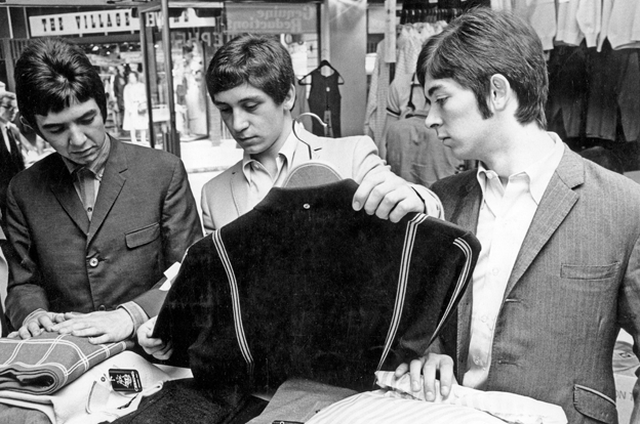 Small Faces - Shopping on Carnaby Street 1966 BW -photo credit: Pictorial Press LtdAlamy
​September 28, 1966 - Small Faces at Offenbach Stadhalle, Germany
German TV "Beat Beat Beat" performing "Hey Girl", "All Or Nothing", "What'cha Gonna Do" & "Sha La La Lee"
https://vk.com/video-149327340_456250047
"Hey Girl" - Allmusic Song Review
https://www.allmusic.com/song/hey-girl-mt0044708922​
​Though "Hey Girl" made #10 in Britain in 1966, it's not often cited as one of the Small Faces' best early singles, overlooked in favor of titles like "What'cha Gonna Do About It," "Sha La La La Lee," "All or Nothing," and "My Mind's Eye." But really, "Hey Girl" is a pretty good raver, perhaps drawing the very first and most innocent phase of the Small Faces to a close, as they would lay on heavier soul and psychedelic influences from that point onward. ​
It was also important to the band as this, their fourth single, marked the first hit they'd written themselves (they'd written their second single, "I've Got Mine," but that hadn't charted). ​
Like "What'cha Gonna Do About It," "Hey Girl" opens with a nice drum run from Kenney Jones, this one with something of a rat-a-tat rhythm. ​
The lyrics of "Hey Girl" are pretty basic and innocuous, but the tune is a nice peppy catchy soul-rock blend, with a stiff bouncy rhythm that has just a trace of ska, perhaps. The rhythm gets more mod rocky, and more Who-ish in particular, in the circular burst of guitar power chords and splashing drums in the brief instrumental bit that surfaces at the very beginning and the middle. ​
Like several other notable early Small Faces songs, the chorus is built around a cool call-and-response pattern between Steve Marriott and the rest of the band, Marriott soul-shouting as the band chants "Hey! Hey!" like football fans.
If you're looking for a strange cover of "Hey Girl," to Anglo ears at least, go no further than the one, in French, by French rock star Ronnie Bird on his En Public album, recorded shortly after the original version hit the market https://www.youtube.com/watch?v=1sUEQoN18aU
"Hey Girl" Chords - ​https://tabs.ultimate-guitar.com/tab/small-faces/hey-girl-chords-84965
https://www.discogs.com/The-Small-Faces-Hey-Girl-Almost-Grown/master/276559
https://en.wikipedia.org/wiki/Hey_Girl_(Small_Faces_song)
https://en.wikipedia.org/wiki/Small_Faces_(1966_album)
https://www.songfacts.com/facts/small-faces/hey-girl
https://www.udiscovermusic.com/stories/small-faces-hey-girl-song/
You Are Here:
​Small Faces Single "Hey Girl" 1966
​https://ronnielane.com/small-faces-single-hey-girl-1966.html
Small Faces
​​https://www.ronnielane.com/small-faces.html
Ronnie Lane Complete Album Discography
​https://www.ronnielane.com/ronnie-lane-complete-album-discography.html