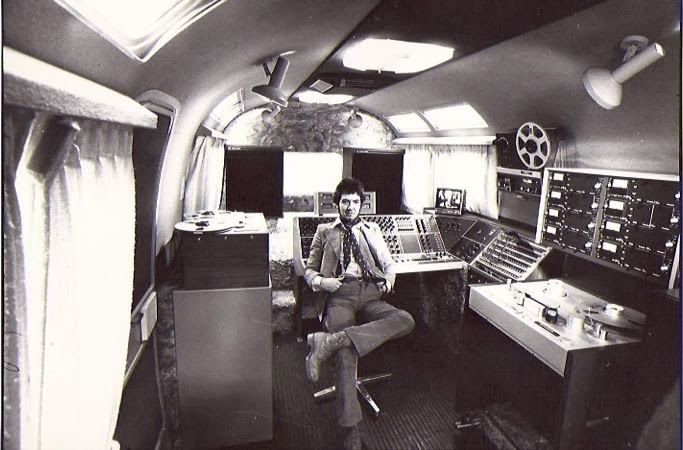 Ronnie Lane inside the Ronnie Lane Mobile Studio (LMS)
The LMS was founded in 1972, when Ronnie Lane, the bass player, songwriter and singer with Small Faces, Faces and Slim Chance imported a 1968 Airstream Trailer from the United States.
The Ronnie Lane Mobile Studio was one of the first ever mobile recording studios, and contained a 16 track studio housed in a 26' Airstream trailer, with a Helios mixing console, Studer and Revox tape machines, and Tannoy monitoring.
​The studio was built by audio engineer Ron Nevison.
At the time, the market in mobile studios was very limited and Ronnie's only real competition was
​The Rolling Stones mobile, which kicked off in the same year.
Original advert brochures for Ronnie Lane’s Mobile Studio (courtesy of Keith Smart)
​click images to enlarge
After leaving Faces in June 1973, Lane based the studio on his English farm, Fishpool, in the hamlet of Hyssington, near Churchstoke, in Powys, Wales.
Right out of the box the LMS was a massive success, and the sound of the 'room' was legendary. With slightly concave shoulders across the whole length and width of the vehicle, the bass response, devoid of obligatory standing waves, was stupendous, and many eminent pro​ducers considered it the flattest & most accurate control room in the world.​
At Fishpool Ronnie Lane used the LMS to record his first solo album Anymore for Anymore (1974).
​He also used the studio to record One for the Road (1976),
​with an image of the mobile recording studio featured on the album cover.
​In addition to using the studio himself, Lane leased it to numerous other artists for their own recordings.
Pretty low tech, even for the day, but relying on a fabulous room, great acoustics, and a classic British analogue sound chain, driven by a proper recording console.
From the very first year of operation the LMS was responsible for some of the most successful and influential recordings of rock music history, and today's record companies and digital studios 'in a box' that abound in every artist's bedroom can only gaze in wonder at the kind of success that a proper studio could have, with great musicians and the benefit of dedicated analogue sound, provided by true professional engineers and producers.
After that first year the floodgates opened and the catalogue of classic recordings and legendary producers that were created inside the LMS's pastel blue, shag pile-lined aluminium shell is unmatched anywhere in rock & roll.
Eric Clapton and Ronnie Lane
"Eric Clapton telephoned to speak about Ronnie a few years ago.
We chatted about twenty minutes.
He told me some fabulous stories.
One was that he recorded the first version of WONDERFUL TONIGHT at Fishpool using the LMS.
He had a fight with Ronnie once, they were both drunk and ended up in the duck pond laughing.
They then decided to become Blood brothers and cut their arms to mix their blood."
~Keith Smart
Albums recorded with Ronnie Lane's Mobile Studio
In Progress
https://www.discogs.com/label/348576-Ronnie-Lanes-Mobile-Studio
The Faces – "Ooh La La" (their biggest seller) UK #1 US #3
Eric Clapton, Rainbow Concert (1973) UK #2 US #3
Rory Gallagher, Irish Tour '74 (1974)
The Who: Quadrophenia (1973) UK #1 US #2
​The Who By Numbers (1975) UK #3 US #2
Rick Wakeman: Journey to the Centre of the Earth (live) (1974) and Lisztomania (1975)
Bad Company: Bad Company (1974) UK #1 US #1
Bad Company:
Peter Frampton: Frampton (1974)
​Billy Nicholls, Love Songs (1974)
Chilli Willi and the Red Hot Peppers: Bongos Over Balham (1974)
​​Mott the Hoople: Drive On (1975)
Andy Fraser Band: In Your Eyes (1975)
Led Zeppelin: Physical Graffiti (1975) UK #1. US #1
Barry Humphries, Dame Edna Everage: Housewife Superstar (1976).
Eric Burdon: Darkness Darkness (1980)
The Jackie Lynton Band: The Jackie Lynton Band (1980)
The Legendary Majik Mijits - Ronnie Lane & Steve Marriott (1981, released 2000)
Peyote: Quite Like It (2012)
The Stones – "Black & Blue" UK #2 US #1 not confirmed
Mott The Hoople – "Mott" UK #12 US #21
Ronnie Lane – "Slim Chance"
"Rough mix" (w. Pete Townsend)
It's no co-incidence that the greatest drum sounds of all time, the final refinement of the classic Zeppelin & Bonham sound, the purest interpretation of The Who & Moonie's explosive, clattering Premier sound and the loose, thundering energy of the Faces, and Kenny's big Ludwig noise; were all captured and preserved in the Lane Mobile Studio. The really great records didn't make themselves. The LMS made them.
Other users of the studio include: Bob Marley, Jack Bruce, Marc Bolan, David Bowie, Van Morrison, The Pretty Things, The Damned, Elvis Costello, Stevie Wonder, John Lee Hooker, Keith & Ronnie, B.B. King, Dave Edmunds, Jeff Beck
Total sales of recordings from the LMS, around $500 million.
From the Desk of Keith Smart
Ronnie Lane Mobile Studio Equipment and Insurance Documents
Click each photo to view in a larger window
In 1982 Lane's Mobile Studio was sold by Ronnie to another to become owner, when Ronnie's illness with MS has really taken hold. Back in '82 the owner, together with partner, Teddy Roffey, (the flamboyant & notorious owner of Escape Studios, in Kent) bought the LMS just to preserve it, where it was used exclusively with private clients.
Ronnie Lane's Mobile Studio was also used re-mixing and archiving all of the first 7 years of Bob Marley & The Wailers JAD Records work, recording and re-mixing live sessions by The Pretty Things, Eddy Grant, Love, & David Gilmour, archiving and re-mixing classic EMI & Phillips analogue albums for vinyl re-issue.
Teddy's retirement from the business, a flood and the passage of time precipitated a major overhaul a year or two ago (circa ~2007), incorporating the first change of decor in 35 years, resplendent in classic 70's orange, cream & mauve.
The studio underwent a major overhaul in 2009, with the owners launching a vinyl label called LMS Vinyl.
Stories from the LMS 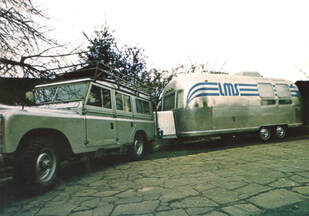 ​Steve Fisher ~ I met Boo Oldfield through a friend at work at the beginning of the 80's. She was with Ronnie and knew I was interested in recording. They had no one to look after the mobile (LMS) so I stepped in. I got to know Ronnie very well indeed. I lived only a few streets away in Kentish Town and would often get a call that he was doing some recording at home, usually on his Tascam 144 portastudio! I spent many evenings with him helping out. I can't recall all the musicians I met there but George Carlis used to help out on sax and Neil Hubbard was around. Anyway I have some rough demos on cassette . Ronnie arranged to record in a pub in Colliers Wood and I helped out. The band was Ian Stewart (Piano), Chrissie Stewart (bass), Bruce Rowland (Drums), Mick Weaver (Hammond). I can't recall who played guitars, Ronnie was working with lots of people at the time including Neil Hubbard (Roxy Music) and James Honeyman Scott (The Pretenders). I think it could have been Alun Davies. Anyway, I have some cassette recorded outtakes from those sessions - "this joint is jumping" is the highlight. We did a lot of gigs around London during this time, I helped with the sound and acted as roadie, 100 Club, Dingwalls, Bridge House in Canning Town, Half Moon in Putney, etc. My favourite was Dingwalls as he had teamed up with Mick Green and they did a fabulous R&B version of How Come. James Honeyman Scott played one gig I believe and very sadly died only a short time afterwards. In 1981 Ronnie played at Glastonbury - how different it was in those days! I met Marriane Faithful - what a treat. Ronnie located the LMS down at his house in Richmond where Kate lived with Luke, Alana and Ruben. I was parachuted in to help out with the Blockheads who were taking a break from Chas and Ian and knocked out some fabulous tracks with Charley Charles (the drummer) singing. John Turnbull taught me a few tricks for the guitar. Most of the engineering was done by Ian Horne. I was working during the day and could only cover the evenings. I would love to find the tapes - if anyone knows! Most of the history around the Majik Migits has been well recorded. I was working as a structural engineer in London and was asked to fire up the LMS one evening so Ronnie could play some tracks. I had no idea Steve would be there and as the end of the evening Steve stuck his head through the door and asked me to engineer the album. Nearly cost me dearly as I didn't go back to work for 2 weeks and nearly lost my job as a result. I recruited in a friend of mine Mike Conry who came down from Birmingham and we were off. It was quite a big thing given I had no formal engineering training but I had good ears and I think we achieved something very special indeed. Boo and Pam were around a lot of the time keeping us cheerful. It's true that Toe Rag was recorded in the bar. We had very few screens so I piled up all of the soft chairs I could find to get some separation - they looked like gun emplacements! Mostly the musicians were not in a fit state to get home - there was plenty of stuff consumed so I used to drive some of them home in the Toyota Land Cruiser that towed the LMS. It was always very late at night and we ran a lot of red lights! Eventually the LMS developed a problem in the Helios Desk that I could not resolve even though I stripped the whole thing down. Ronnie decided to sell and soon moved the US. Never saw him again which still makes me sad. I keep up contact with Boo from time to time. Ronnie had fortunes slip though his fingers but he was so philosophical about it. Easy Come, Easy go he used to tell me. Even now in my early 60's I miss him a lot. God Bless ps - of course i have lots of stories about this part of my life.
Stay tuned for another Steve Fisher + Ronnie Lane installment!
If YOU have more information and/or stories about Ronnie Lane's Mobile Studio, please contact us:
ronnielanerecords@gmail.com
Sources
​​https://en.wikipedia.org/wiki/Ronnie_Lane%27s_Mobile_Studio
​​​http://www.retrosellers.com/features329.htm
​https://www.facebook.com/The.K.Smart/media_set?set=a.506912616001798&type=3
http://www.keithsmart.com/
​https://www.gearslutz.com/board/mobile-amp-location-rigs/426062-lms-ronnie-lane-airstream-mobile-recording-rig.html
You Are Here:
​https://www.ronnielane.com/ronnie-lanes-mobile-studio-lms.html
Albums Recorded With Ronnie Lane's Mobile Studio LMS
https://www.ronnielane.com/albums-recorded-with-ronnie-lanes-mobile-studio-lms.html
​Ronnie Lane Complete Album Discography
https://www.ronnielane.com/ronnie-lane-complete-album-discography.html