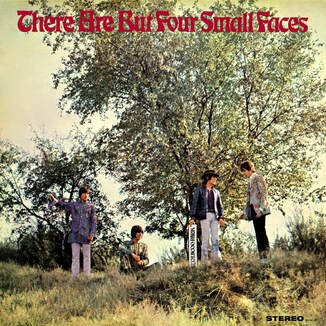 Small Faces - There Are But Four Small Faces, 1967 album cover
Listen to Small Faces There Are But Four Small Faces (1967) on Spotify!
​Listen to Small Faces There Are But Four Small Faces (1967), remastered with bonus tracks
​Small Faces - There Are But Four Small Faces Album (1967) Review by Stephen Thomas Erlewine
​This is where the already-confusing Small Faces discography gets baffling. Designed for the American market in 1968, There Are But Four Small Faces is based upon their 1967 self-titled album for Immediate Records -- the album that should not be confused with the 1966 album called Small Faces on Decca -- but shuffles the running order considerably, cutting out seven songs from the 1967 LP and then adding five songs released on singles: the hits "Itchycoo Park," "Tin Soldier," and "Here Come the Nice," plus the B-sides "I'm Only Dreaming" and "I Feel Much Better." Contrary to the pastoral setting pictured on the album art, this rejiggering preserves the edgy mods of the 1967 album Small Faces, emphasizing their pop propulsion, artful soul, and furious rock & roll. By some measures, the 1967 Immediate LP is their best -- it's adventurous, bright, colorful, and concentrated, the brevity of the songs playing like snappy pop art -- and that essence is here, enhanced by "Tin Soldier," "Here Come the Nice," and "Itchycoo Park," the three greatest singles the band ever cut. As an introduction, it's first-rate, whether it was delivered in 1968 or decades later. [Charly's 2014 reissue of There Are But Four Small Faces contains the stereo mix on the first disc, supplemented by four bonus tracks, while the second contains the "promotional DJ version" mono mix of the album and three bonus tracks, all different than the cuts on the first CD. The stereo bonus tracks have alternate takes and mixes of "Eddie's Dreaming" and "Show Me the Way," an early mix of "Get Yourself Together," and an alternate take of "(Tell Me) Have You Ever Seen Me." The mono bonus tracks contain a TV backing track for "Tin Soldier," the "USA Version" of "Here Come the Nice," and an alternate mix of "Green Circles." Most of this is collector ephemera but the mono mix is indeed appealingly punchy and perhaps a better way to listen to this music.]
https://www.allmusic.com/album/there-are-but-four-small-faces-mw0000265317
https://www.discogs.com/Small-Faces-There-Are-But-Four-Small-Faces/master/291847
https://en.wikipedia.org/wiki/There_Are_But_Four_Small_Faces