​Small Faces Single "Patterns" 1967
This page is a work in progress
​Small Faces Single Patterns 1967
Small Faces - "Patterns" Single on Spotify!
https://open.spotify.com/album/5x1nkchgXGSztREWo1aK4I
"Patterns" is the eighth single by British rock band, Small Faces, first released on Decca Records in 1967.
It was the first of two unauthorised singles released in the United Kingdom (the second being "Afterglow (of Your Love)" in 1969). It was written by the Small Faces primary songwriters Steve Marriott and Ronnie Lane.
It became one of few singles by the group that features Lane on primary vocals, in contrast to Marriott's standard role as the group's lead vocalist.​
​Song Profile
The song was released a while after Small Faces switched record labels and management from Decca Records to Immediate Records. Don Arden, who wanted to capitalise on the Small Faces success during his management, issued several songs from the Decca archives onto the market. The majority of these tracks appeared on From the Beginning, a compilation album released on June 2, 1967, while "Patterns" was chosen as the lead single. As the tensions between Decca and Small Faces were high, the band refused to promote the song, which failed to chart on the UK Singles Chart, the second to do so after "I've Got Mine" in 1965. Ultimately it became their last single released by Decca Records.
​The single was not released on an album upon release, and got its first release in 1976 on the compilation album Rock Roots, released by Decca. It has since been released on several re-issues of Small Faces, most notably it was included on the 2012 deluxe edition of the album, where it received a duophonic mix for the first time.
Original issues of the single release are now considered rare collectibles and can sell for hundreds of pounds on the market. The B-side "E Too D", a hard rock-influenced song, was previously issued as the penultimate track on their debut album in May 1966.
From Making Room For Ravers
When the Small Faces moved from Don Arden's management and Decca Records to Immediate in 1967, Arden looked to capitalise on his investment and issued unreleased Small Faces tracks as From the Beginning. At the same time he released a single on Decca. "Patterns" was previously unreleased although "E Too D" had appeared on the first Small Faces album. Although "Patterns" was little more than a demo it was actually finished.
​The Small Faces were about to release "Here Come The Nice" / "Talk To You" on Immediate Records and were faced with having two new singles available at the same time. Their answer was to refuse to promote the single. They knew they would not receive payment for it and it was years before they received any royalties from this period.
​This has now become one of the rarest Small Faces singles according to the UK magazine Record Collector with an estimated value of £70. A UK export picture sleeve was produced for the Scandinavian market and this is even rarer and could be worth up to £150!
From Rate Your Music
​​A spoiler release from the group’s previous label issued to compete with their newly-minted Immediate label material. The song is fine, even if it doesn’t feature a Steve Marriott lead vocal, with pulsing guitars, interspersed drum-breaks and harmony vocals.
The fact is though that the group on their new label had already moved beyond more straightforward songs like this as great 45’s like “Itchycoo Park” and “Tin Soldier” were primed and ready for release later the same year.
Small Faces - Cover photo from their "Patterns"/"E Too D" single 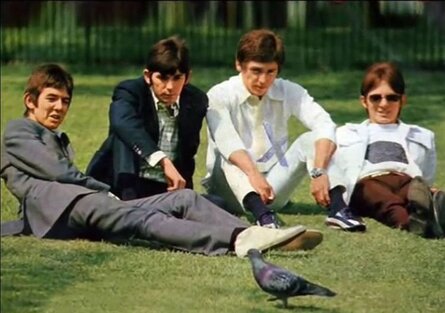