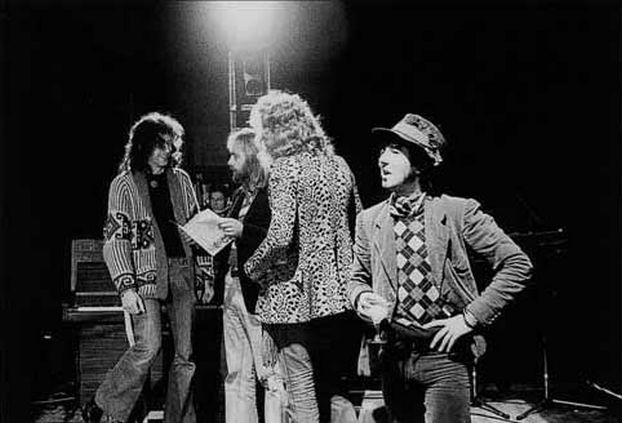 Roy Harper's Valentines Day Massacre Concert February 14, 1974 Afternoon Band Practice Rehearsal with Jimmy Page, Roy Harper, Robert Plant and Ronnie Lane
Ronnie Lane, Roy Harper, Max Middleton, Jimmy Page, Keith Moon - February 14, 1974
They'd only practiced the Valentine cut "Male Chauvinist Pig Blues"  that afternoon. They also played "Too Many Movies" and "Home" which would appear on the live album Flashes from the Archives of Oblivion. At one point Roy presented his musician friends with  Harpic Awards:
Keith Moon receiving the Harpic Award from John Bonham
Like Faces guitarist Ronnie Wood, Roy Harper was best friends with a lot of English musicians. By 1974, he'd recorded with Bert Jansch, Keith Emerson, Ritchie Blackmore, Nicky Hopkins, Ian Anderson and the musicians who performed at the album release party. These friendships were sealed when Harper faced what appeared to be a life threatening illness a year earlier. And of course there's the Led Zeppelin III track  "Hats Off To (Roy) Harper" and the future Pink Floyd track " Have A Cigar" which Roy would sing.
Jimmy Page: Tales of Roy Harper's Valentines Day Massacre - February 14, 1974
"I joined Roy Harper at the Valentine concert in Finsbury Park, London."
"Roy Harper's Valentine concert was at the Rainbow Theatre in Finsbury Park in 1974 and I joined him on this memorable gig. During the acoustic part of this set, I played "Male Chauvinist Pig Blues" and then both Ray and I switched to electric when we played "Too Many Moves" and "Home" with the classic rhythm section of Keith Moon on drums and Ronnie Lane on bass. We rehearsed earlier that afternoon."
"Roy had an award made for that evening" "The Harpic Award" for the contributing musicians. John Bonham became the MC and they were duly distributed. Harpic was an affectionate name for Roy."
~Jimmy Page

https://jimmypagemusic.blogspot.com/2016/02/on-this-day-14-february.html
​https://www.ledzeppelin.com/event/february-14-1974
​Press Review: So there we all were last Thursday at The Rainbow, five-and-a-half months (and about four hundred studio-hours) later for a concert to launch Harper's resurrection album called "Valentine" (the concert was called "Roy Harper's Valentine Day Massacre").
Everything was on its best behaviour. .The sound system, Harper's  guitar-strings, David Bedford's 18-piece Orchestra. No embarassing dancers like at the Albert Hall back in December, just a smoothly-run first half that any stout Mancunian Son could be -well proud of. And his houseful of dutiful fans were as good as can be.
And when the audience returned to their seats from an interval chasing hot- dogs and beer, they found this cosy domestic scene had been magically built on stage: flowered , wallpaper, standard lamps,  a three-piece suite and some friends watching TV.
Then, after his little jailbait teaser "Forbidden Fruit", about  thirteen-year-old Lewis Carroll fantasies and the "flames of magic thirst" (see Thrills) he was presenting his theories about the behaviour of spermatozoa when some uncouth, unhip unbeliever, called out “where’s Pagey?” 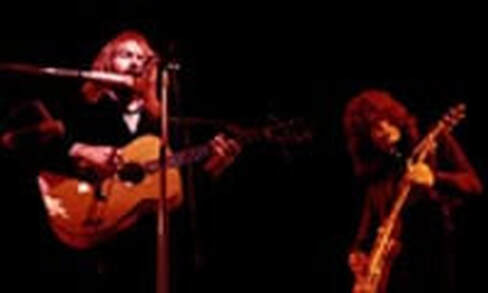 Roy Harper and Jimmy Page Roy Harper's Valentines Day Massacre February 14, 1974
He distributed a withering look and declined to answer the oaf. But the interruption was enough to send Harper crashing into "Highway Blues" wrenching the chorus out of his throat with heartfelt rage. This then left him rather hoarse for "South Africa", which wouldn't really have mattered except that he was singing the line "I am young and strong" in a thin croak.
Then his quiet little "At Home" was interrupted again by a ring at the doorbell and a cheery cry of "Avon calling!"
A second Avon rep in a Butlin's Red Coat, bearing a distinct resemblance to Keith Moon, appeared to herald the demolition of the set. The parlour wall was whisked up into the flies; the roadies, like so many bailiffs, carted off the three-piece, and Harper (a nice Anarchist touch this) dropped the TV set casually into the orchestra pit. Ronnie Lane wandered on, looking for somewhere to plug in his bass, his hair rumpled as if he had just rolled out of bed, and with about a week's growth of beard on his fubsy  features – otherwise looking sharp and dapper in  a gun-metal shot-silk suit. 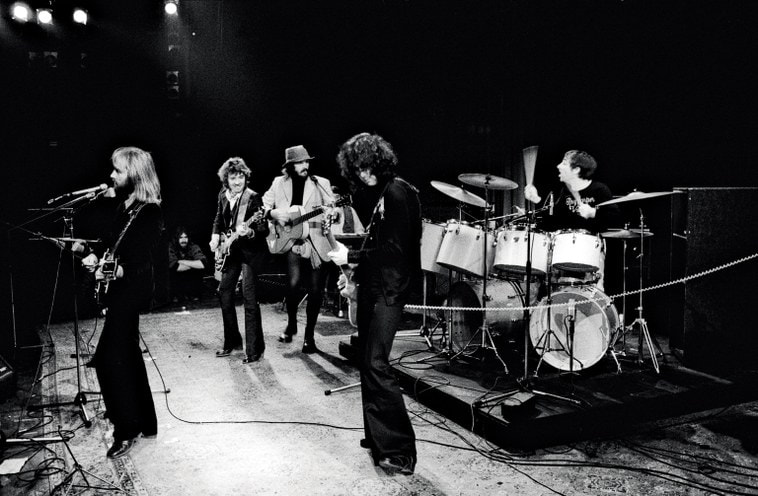 The Intergalactic Elephant Band:
Roy Harper, Ronnie Lane, John Bonham, Max Middleton, Jimmy Page &  Keith Moon
A curtain rose; a massive platform was wheeled forward with a monster white drumkit and several stacks of amps twinkling and ready.
Harper's son Nicky, a groover of six, took possession of a mike and started swapping "knock-knock" jokes with Keith Moon, who soon realized the futility of trying to better a funky six-year-old and sought consolation by flailing into his kit like an extremely angry spastic whirlwind. "Male Chauvanist Pig Blues" was the piece, and it really was quite a charge, I can tell you, when they all got it on - though I was beginning to wish my ear wasn't about four feet from the left-hand speakers.
It was aII a little Moon-mad; I suppose ...  After the- heavy decibels and heavy friends had departed, Harper came back and, standing liked a spaced-out Pagliacci in the spot clutching the air, he sang the unaccompanied "So ManyTimes", said goodnight, changed his mind and gave the stamping multitude "One-Man Rock-and-Roll Band".
Whatever I think (or write), Harper remains a master studio craftsman at fashioning  what  he calls “Labyrinth jobs” out of his own superb songs. Thank you Mr. Harper, for inviting me to your superstar party.

[Austin John Marshall, NME 2/23/74]
​Roy Harper's Valentine's Day Massacre - Intergalactic Elephant Band
*Rainbow Theatre in London, February 14, 1974* Harper's album Valentine was released on Valentine's Day, February 14, 1974 and featured contributions from Jimmy Page. A concert to mark its release was held on the same day, at London's Rainbow Theatre with Page, Bedford, Max Middleton (of The Jeff Beck Group) on keyboard, Ronnie Lane on bass and Keith Moon on drums. The live album Flashes From the Archives of Oblivion, recorded at that concert, soon followed. Bonzo had attended this gig with Jimmy and the photo proves he was definitely onstage strumming an acoustic guitar. However, as I recall his guitar was not miked up and his strumming isn't audible on the recording. * Robert Plant was also in attendance as MC for the evening. ~notes from YouTube comments
1974 – Ludwig “Roy Harper Valentine’s Day” kit
Keith played a Ludwig kit that appears to be configured similarly to the Premier gold-colored kit,
on 14 Feb. 1974, the Rainbow Theatre, London, as The Intergalactic Elephant Band
​for Roy Harper’s Valentines’ Day concert.
https://www.thewho.net/whotabs/gear/drums/drumsborrowed.html
https://www.kcrw.com/music/shows/morning-becomes-eclectic/jimmy-page
http://discosfundamentais.blogspot.com/2015/09/roy-harper-valentine-1974-folk-rockprog.html
https://en.wikipedia.org/wiki/Flashes_from_the_Archives_of_Oblivion
http://1001-songs.blogspot.com/2014/02/40-year-itch-illusions-and-movies.html
https://www.ledzeppelin.com/event/february-14-1974
You Are Here:
​​https://www.ronnielane.com/roy-harpers-valentines-day-massacre-concert-february-14-1974-rainbow-theatre-finsbury-park-london-england.html
​Roy Harper - Valentine Album 1974
​​https://www.ronnielane.com/roy-harper-valentine-album-1974.html
​​Roy Harper - Flashes From The Archives Of Oblivion Double Live Album (1974)
​​
https://www.ronnielane.com/roy-harper-flashes-from-the-archives-of-oblivion-double-live-album-1974.html
Ronnie Lane Complete Album Discography
https://www.ronnielane.com/ronnie-lane-complete-album-discography.html