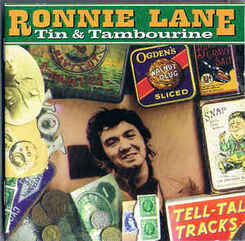 This is indeed a compilation album, but a very special one! Most of the tracks sound familiar, but different as well. Ronnie Lane's brother Stan compiled this album consisting of alternative and live versions of well known Ronnie Lane (and Slim Chance) tracks. The oldest track is a wonderful home demo of 'Richmond', recorded in 1971, when Ronnie was still riding high with The Faces. The seventies close with the demo of 'Winning With Women' which he recorded in February 1980.
There is not explanation of the origins of 'Rat's Tails', 'Only You' and 'Three Cool Cats'. The first two songs could be recorded in 1977 because a version of 'Rat's Tails' was released under the title 'Catmelody' on the 'Rough Mix' album Ronnie recorded with Pete Townsend'. Also recorded for this album, but only added later on a reissue version of 'Rough Mix' was 'Only You'. A more polished version of 'Only You' was released on Ronnie's 'See Me' album, which was to some degree a reshuffled version of his unreleased 'Self Tapper' album. It is possible that 'Three Cool Cats' also stems from this cancelled album, but I would like to point out that is is speculation from my side. The 'Tin & Tambourine' compilation is a nice companion to the 'Luky Seven' compilation, released in 2002.
https://www.discogs.com/Ronnie-Lane-Tin-Tambourine/release/3605800
https://www.amazon.com/Tambourine-Ronnie-Slim-Chance-Lane/dp/B0000248ZH