Ronnie Lane Photo Picture Photographer - Mark Bowman
This page is a work in progress
(All photographs on this page are:  ​All rights reserved – Copyright – Mark Bowman Images (c) 2012)
TO PURCHASE FINE ART LIMITED PRODUCTION PRINTS – CONTACT: markbowmanimages@outlook.com
Mark Bowman Photography
http://www.markbowmanimages.com/
Mark Bowman on Facebook
​https://www.facebook.com/MarkBowman1212/photos
Mark Bowman at YouTube
https://www.youtube.com/user/LedHed121212/videos
​MOVIE:  “The Passing Show – The Life and Music of Ronnie Lane”
"Does anybody remember laughter?"
​All photos by Mark Bowman
​Jimmy Page – Ronnie Lane ARMS Concert – Reunion Arena Dallas, Texas - November 28 & 29, 1983
"These two shows in Dallas were the first in the United States for Jimmy since Oakland 1977 and
the death of John Bonham and created the seeds for what was to become The Firm
and reminded 'ol JP of how much America loved and missed him....
Rock On, Jimmy Page!"
​~Mark Bowman 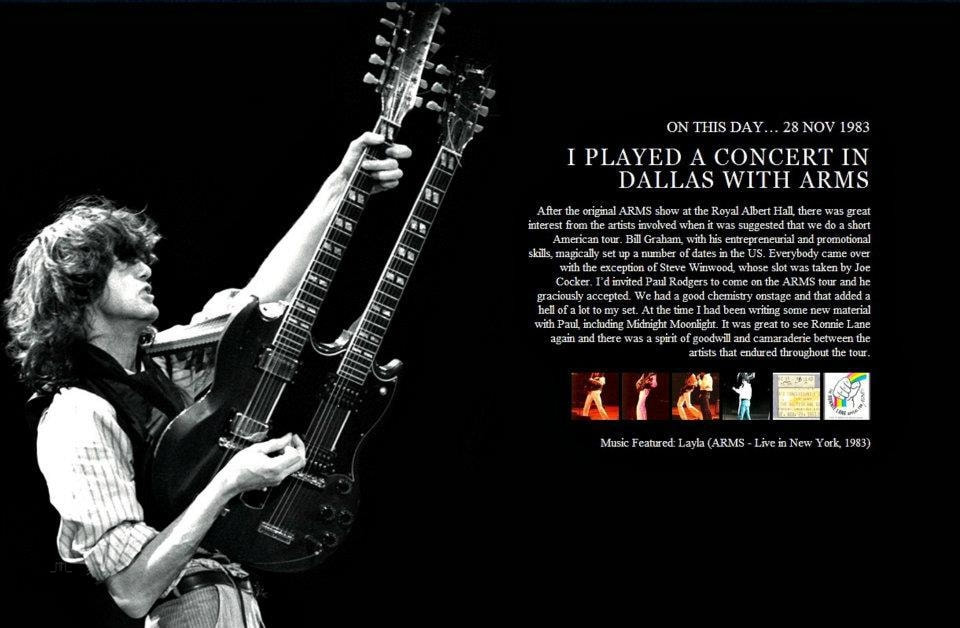 ON THIS DAY 28 NOV 1983 ... I PLAYED A CONCERT IN DALLAS WITH ARMS
"After the original ARMS show at the Royal Albert Hall, there was great interest from
the artists involved when it was suggested that we do a short American tour.
Bill Graham, with his entrepreneurial and promotional skills, magically set up a number of dates in the US. Everybody came over with the exception of Steve Winwood, whose slot was taken by Joe Cocker.
I'd invited Paul Rogers to come on the ARMS tour and he graciously accepted.
We had a good chemistry onstage and that added a hell of a lot to my set.
At the time I had been writing some new material with Paul, including Midnight Moonlight.
It was great to see Ronnie Lane again and there was a spirit of goodwill and camaraderie
between the artists that endured throughout the tour."
~Jimmy Page
https://jimmypagemusic.blogspot.com/2015/11/on-this-day-28-november.html
Jimmy Page and Paul Rogers 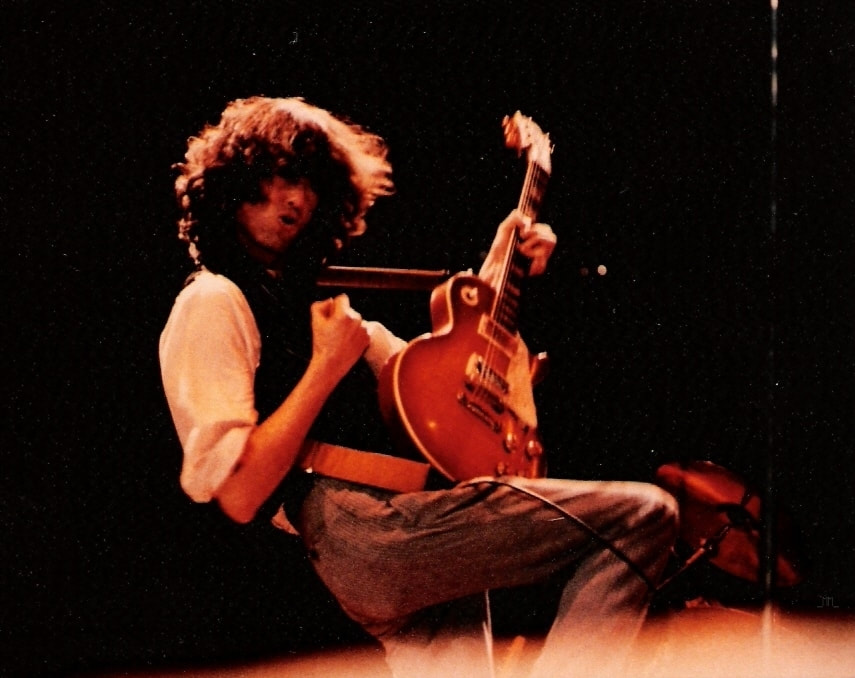 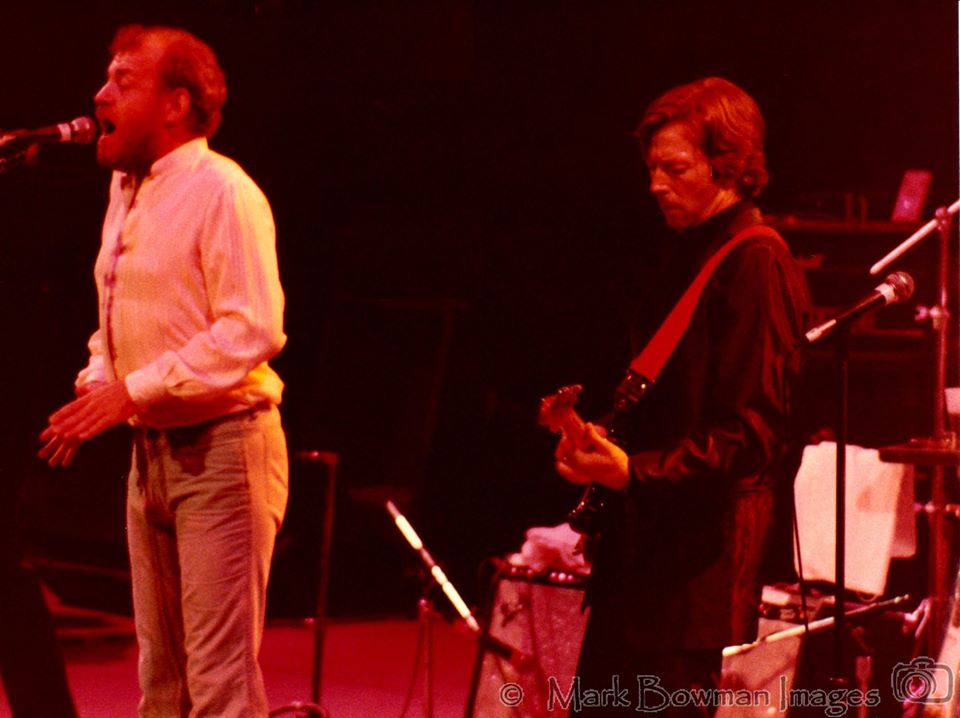 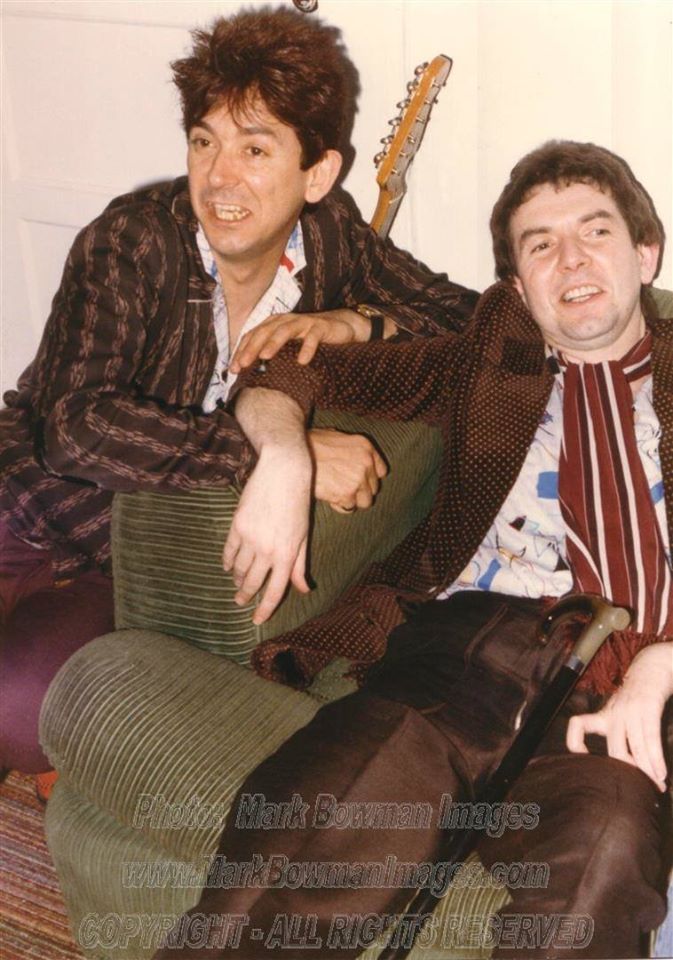 "I first met Julian Lennon and was able to shoot 2 shows of his in Houston in March 1985 -
​the first week he ever went on tour in his life... Met him with Ronnie Lane."
​~Mark Bowman
Jimmy Page and Paul Rogers with THE FIRM
​The Summit - Houston, Texas March 21, 1985
"I took these photos sitting on a chair onstage about 10 feet from Jimmy, sitting with Ronnie Lane...
It was the first time I Ronnie and I ever ever went out "on the town" together
​- some very special times."
​~Mark Bowman
March 21, 1985
"I was invited to go to the show and sit onstage with Ronnie Lane in The Summit for
"The Firm's" first visit to Houston, Texas .
​(Onstage L-R - Jimmy Page, Tony Franklin and Paul Rodgers playing "Live In Peace".....)
What an experience!"
~Mark Bowman
Jimmy Page, Violin Bow, Solo
-With the requisite dry ice fog & smoke, of course!
Ronnie Lane and Jimmy Page - Ronnie Lane's Party - Hotel La Mansion Austin, Texas - March 23, 1985 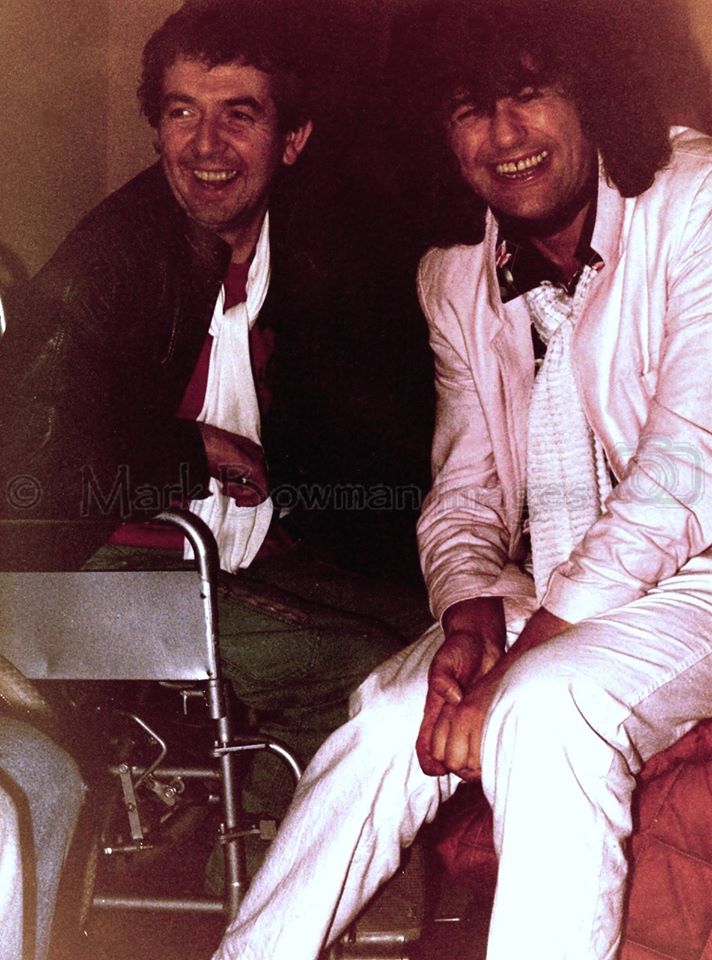 Mark Bowman on Jimmy Page
When I showed him this photo years later, he looked at it and said, “Wow Mark, not very many people have caught me that, uh…..”relaxed”….in a photo….”
Thanks for many years of good times, Mr. James Patrick Page…..!
~Mark Bowman
Ronnie Lane's dinner party....Houston, Texas - August 17, 1985
"The night I got to introduce Ann and Nancy Wilson to Ronnie.... Cameron Crowe was there too....
​Ronnie played his new demo of his song “Spiritual Babe” for the first time to anyone...
One of those nights for the ages....!"
"I’m really glad they had a day off from the tour to come over and visit Ronnie.....
​They really made him happy- He had a blast!"
~Mark Bowman
Ronnie Lane, with Nancy and Ann Wilson of classic rock band Heart
See more about and listen to
Ian McLagan & The Bump Band ‎- Spiritual Boy - An Appreciation Of Ronnie Lane Album (2006)
https://www.ronnielane.com/ian-mclagan-and-the-bump-band-spiritual-boy-an-appreciation-of-ronnie-lane-album-2006.html
"Can't tell you how thrilled I was to find this old shot I took of legendary Houston DJ Dayna Steele & Writer/Director Cameron Crowe in Houston on August 17, 1985 at Ronnie Lane's dinner party at his home...
That's HEART's Nancy Wilson (and Cameron's girlfriend before they got married) in the background.
I haven't seen this shot in YEARS and it just reminded me of a stellar evening FOR THE AGES....
Now check out this photo closely...
Cameron is holding up Dayna's "FAST TIMES AT RIDGEMONT HIGH" Sneakers and just marveling at them...! Cameron WROTE "Fast Times".... Probably one of the coolest moments I've ever captured on film....
You GO, Dayna....!"
​~Mark Bowman
Right above: "This photo was a beautiful gift from Theresa DiMenno on my 50th birthday...
​I had never seen this photo prior to that time....
​It's a treasured piece..!"
"Hey Ronnie - Who's Your Favorite Keyboard Player??"
Mark Bowman and Ronnie Lane
Spending a summer day over at Ronnie's place - Summer 1985 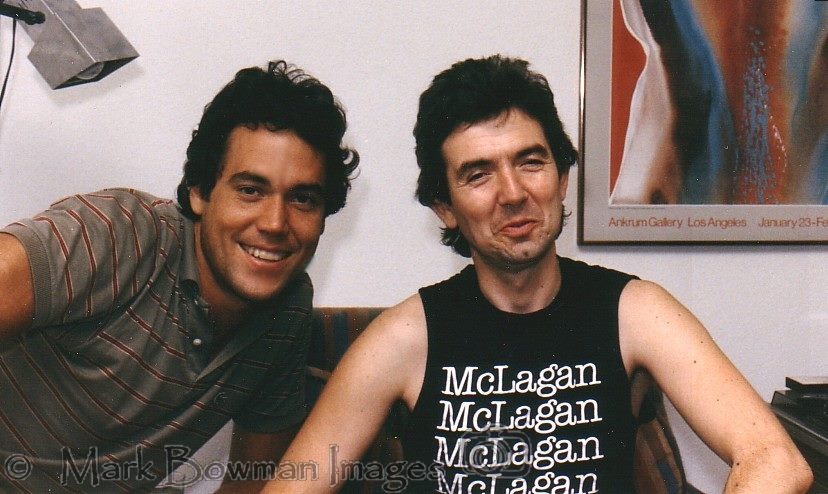 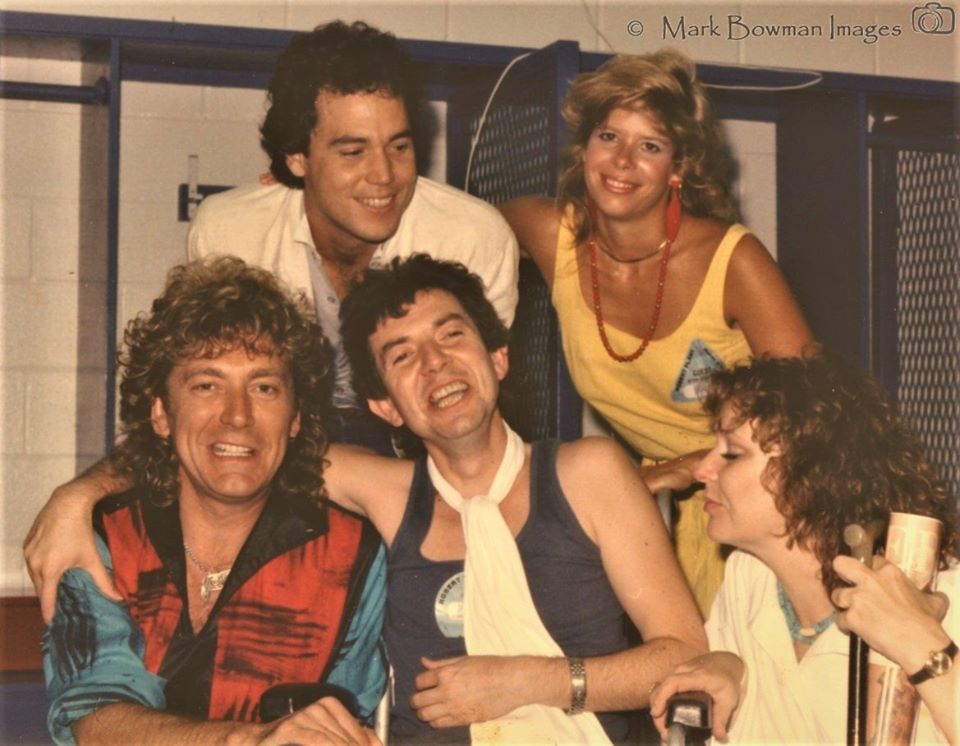 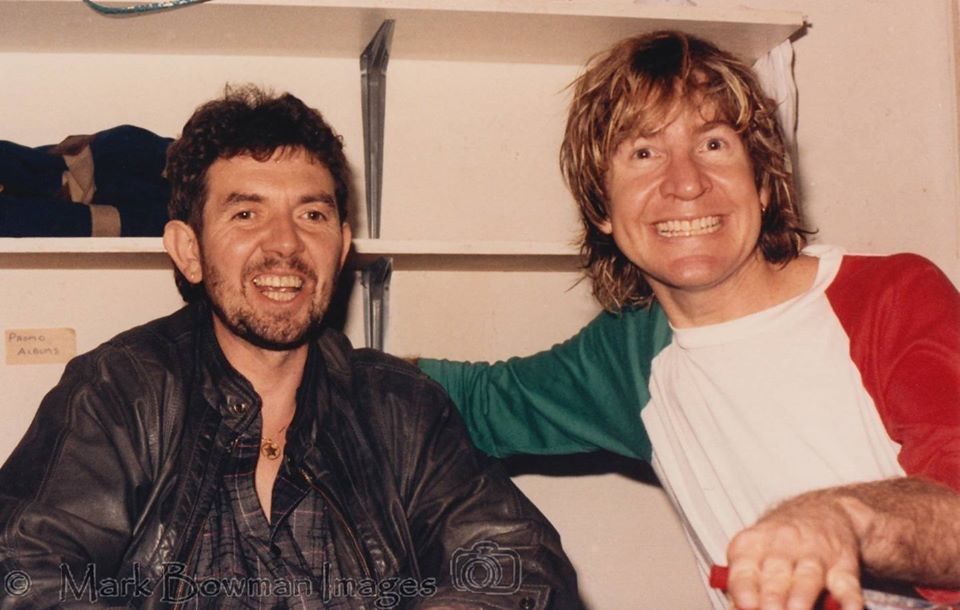 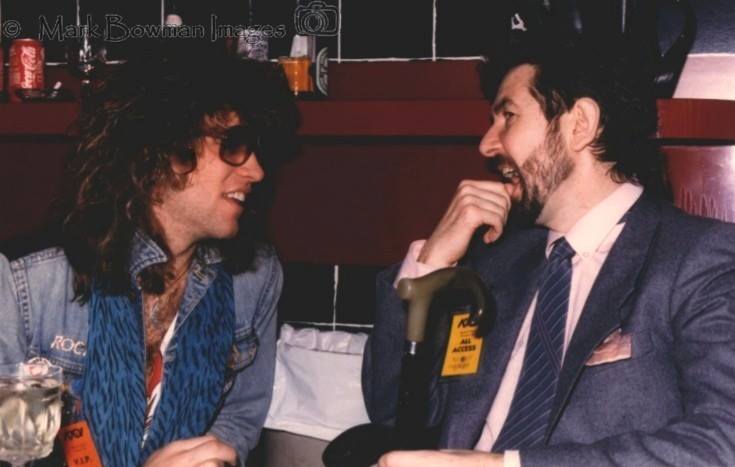 VIP Room at Fizz on Richmond. Paul Shaffer and Martha Quinn a few feet away,
​along with Slim Jim Phantom, Lee Rocker and Earl Slick. Maybe Joe Lynn Turner as well
Ronnie Lane & Tom Bailey of The Thompson Twins - Dallas, Texas - 1986
"Goodbye Houston, Hello Austin...!
Ronnie Lane's last day in Houston... April 1986
I don't think Ronnie had any idea what his new Austin pals had awaiting him...!
​But what an adventure for him....!!
Posing in front of his ARMS photo montage and his black Strat." ~Mark Bowman
Ronnie Lane - 1986 - The day Ronnie moved to Austin........
(Check out the ARMS collage of photos that Ian "Stu" Stewart did for Ronnie that hung in his home)
​Ronnie Lane and Mark Bowman
The last day in Houston....The day he moved to Austin....
April 1986
Photos by Theresa DiMenno
Ronnie Lane **Portrait**
Soon after the move to Austin..... 1986
Ronnie Lane and Kris Kristofferson On Kris' Bus - Auditorium Shores - Austin, Texas - April 1986
"The good old Riverfest on Town Lake days... Ronnie had just moved to Austin..."
Stevie Nicks & Ronnie Lane – Austin 1986
Austin, Texas - April 12, 1986
"Backstage at the Frank Erwin Center... Don't know how many of you caught this concert,
but Stevie put 3 chairs not on the side, but out ON THE STAGE for Ronnie, me and my girlfriend at the time.... We weren't expecting that....!
​Stevie dedicated a song to Ronnie & came over during her set and was singing songs with her hands on Ronnie's shoulder - my girlfriend and I could only sit there with our mouths agape....
I had driven in from Houston - Ronnie had just moved to Austin."
​~Mark Bowman
Ronnie Lane in Austin 1988
September 14, 1988 Jimmy Page Outrider Tour - Austin, TX at Frank Erwin Center
https://jimmypagemusic.blogspot.com/2015/09/on-this-day-14-september.html
"I played the Frank Erwin Centre in Austin, Texas on The Outrider solo tour and Ronnie Lane, who now lived and performed locally, appeared with Bucks Burnett and photographer Mark Bowman. I hadn't seen Ronnie for awhile, but I toured with him on the ARMS tour in the UK and the US and it was good to meet up with this extraordinary man and musician again. He is pictured here at the show."
​~Jimmy Page
Ronnie Lane and Jimmy Page – Austin 88
At Ringo Starr's private band dinner at the Four Seasons after his first solo concert EVER held....
"This was such an incredible evening, Ringo Starr's "first ever" solo concert and then afterwards -
the Ringo band dinner came as a total surprise... It's amazing the things that happened with Ronnie
if you were around him... Before I knew it - back at the Four Seasons in Dallas after the gig,
I looked around and there was a four-star catered dinner and a room filled with Clarence Clemons,
Ringo Starr, Barbara Bach, Joe Walsh, Billy Preston, Rick Danko, Levon Helm, Jim Keltner,
Dr. John, Nils Lofgren AND Ronnie Lane, with his wife Susan... It was almost too much to process....
I kept my camera out of the way for the most part and just snapped a couple of quick ones with Rick Danko and Billy Preston with Ronnie because they both wanted a shot with Mr. Lane....
It's hard to fathom that so many of them are gone now...."
​~Mark Bowman
Ronnie Lane and David Lindley - Houston, Texas - October 29, 1988
This was the night of "The Lost Concert"....! 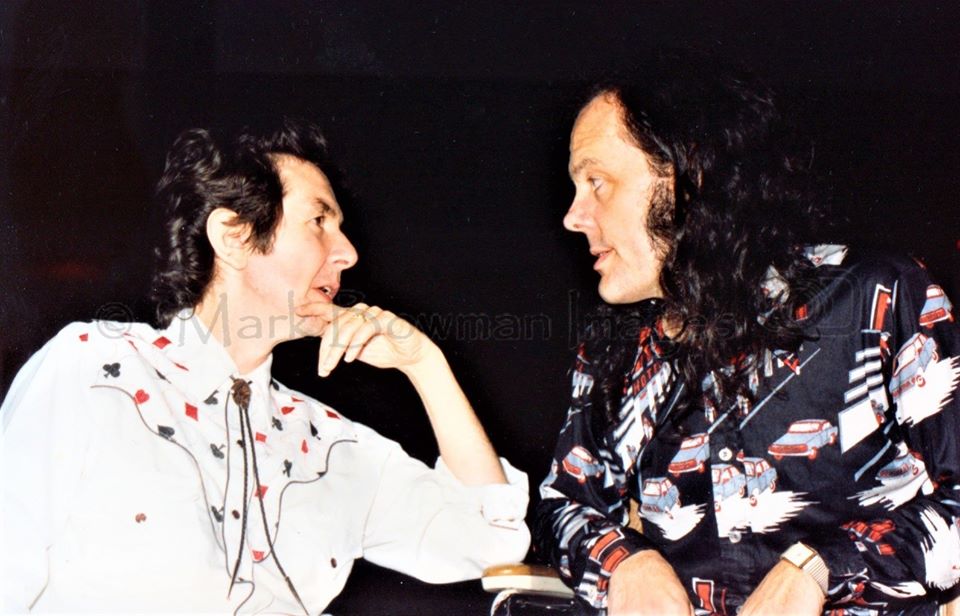 (With Rick Richards of the Georgia Satellites, Daren Hess, Ronnie Johnson and Rich Brotherton)
FROM THE DESK OF MARK BOWMAN:
Houston, Texas - October 29, 1988
Ronnie's set was part of KLOL-FM 101's "Rocktober Music Festival" in Houston, Texas.
The lineup included The Georgia Satellites, Ronnie Lane, Jon Butcher, David Lindley
and El Rayo X.  This is probably the last time Ronnie ever performed in Houston, and probably the last big arena show he ever played in his career, (before a few thousand folks at Houston's George Brown Convention Center) before going off with Ian McLagan in 1990 for the last big hurrah....
​the 1990 Ronnie Lane/Ian McLagan Tour of Japan.
​Ronnie Lane - "The Lost Concert"
​Live in Houston, Texas - October 29, 1988
Film by Mark Bowman Images
(For the last song, off camera, David Lindley joins Ronnie onstage with his mandolin for
a reprise set-ender of "Ooh La La" with Ronnie banging out the final chorus
with such intensity and urgency with his killer band driving the entire thing)
"Ronnie loved his time in Houston in 1985 and 1986 as well as his Austin years - he was active, stronger and very creative during his time in Houston than in later years - (ARMS will never define his time in Houston - that debacle was a separate thing, out of his corporate control) -
and this was a very loving goodbye to a city that loved him back!"
​~Mark Bowman
​Mark Bowman Images - Ronnie Lane and Bobby Keys 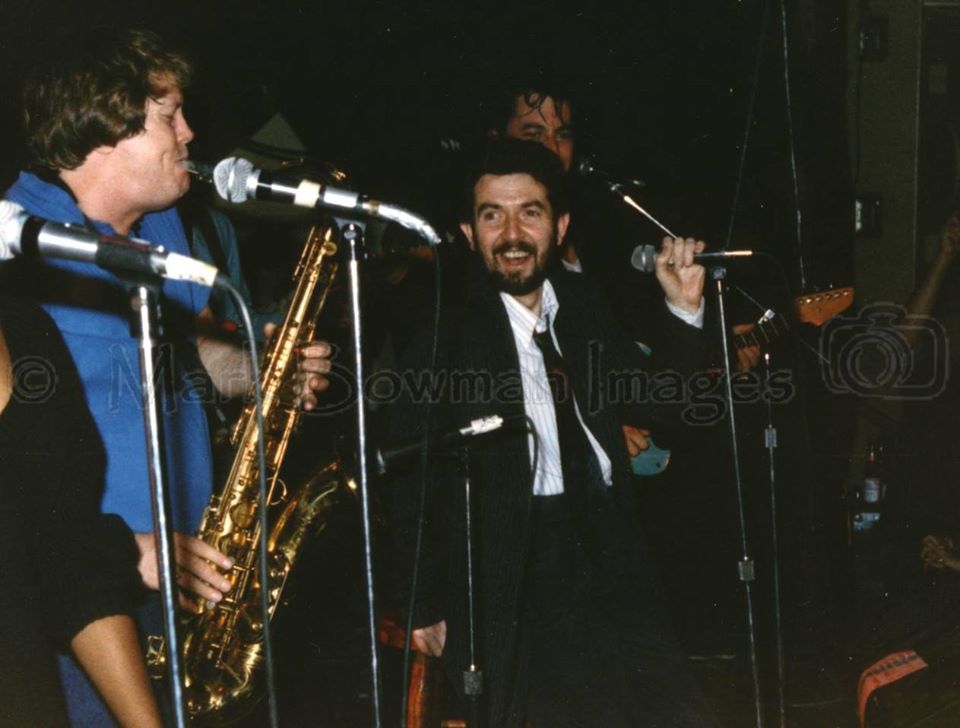 Mark Bowman with Ian McLagan and Friends
"The Rolling Stones were in town and Mac had a gig at the Continental Club in Houston
with The Bump Band..... Guess who showed up??"
Ian McLagan and Ron Wood - Houston 2005
The photo backdrop was taken at Leeds Polytechnic in about 1976, at a Slim Chance gig. 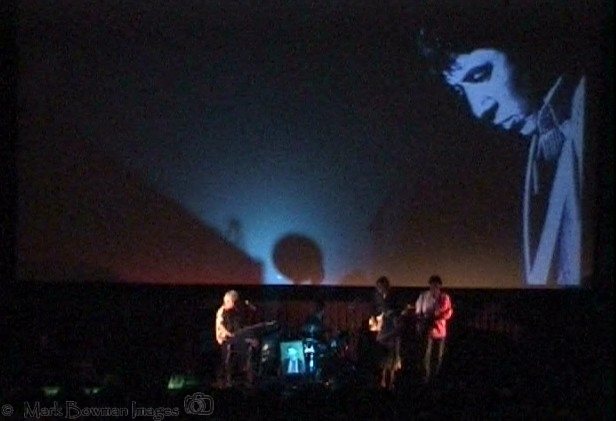 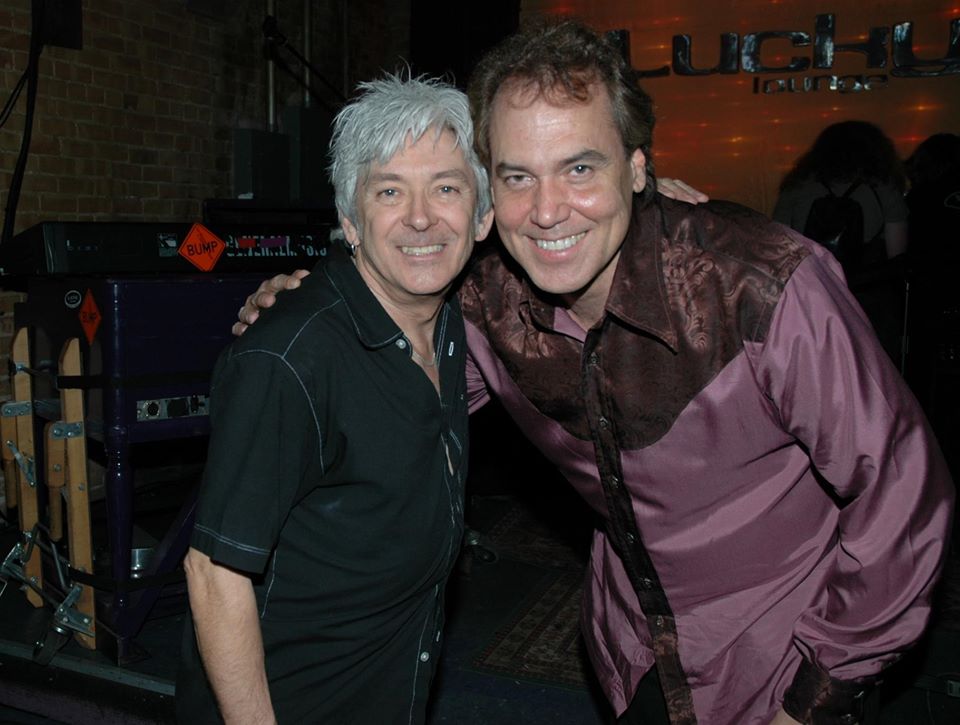 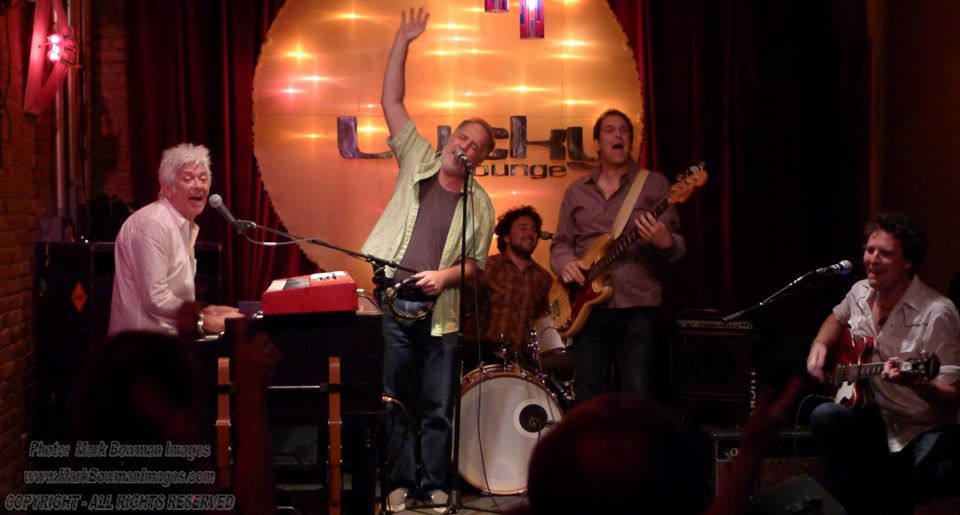 Ian McLagan & the Bump Band - Live at The Lucky Lounge
Austin, Texas - 2009
( L-R Ian McLagan, Don Harvey, Mark Andes, "Scrappy" Jud Newcomb)
Small Faces and Faces were inducted into the Rock and Roll Hall of Fame in 2012
https://www.rockhall.com/inductees/small-faces-faces
Ian McLagan of FACES – Austin 2012
Jody Denberg, Ian McLagan, Mark Bowman
Austin-Bergstrom Int'l Airport - April 12, 2012
Seeing Mac off after he got the mayor's RRHOF proclamation as he gets on a plane with JoRae Di Menno
​on their way to Mac's induction with FACES and The Small Faces into The Rock and Roll Hall Of Fame
Ian McLagan and Jody Denberg at HAAM ATX British Invasion Benefit - Austin, Texas Sept 2014 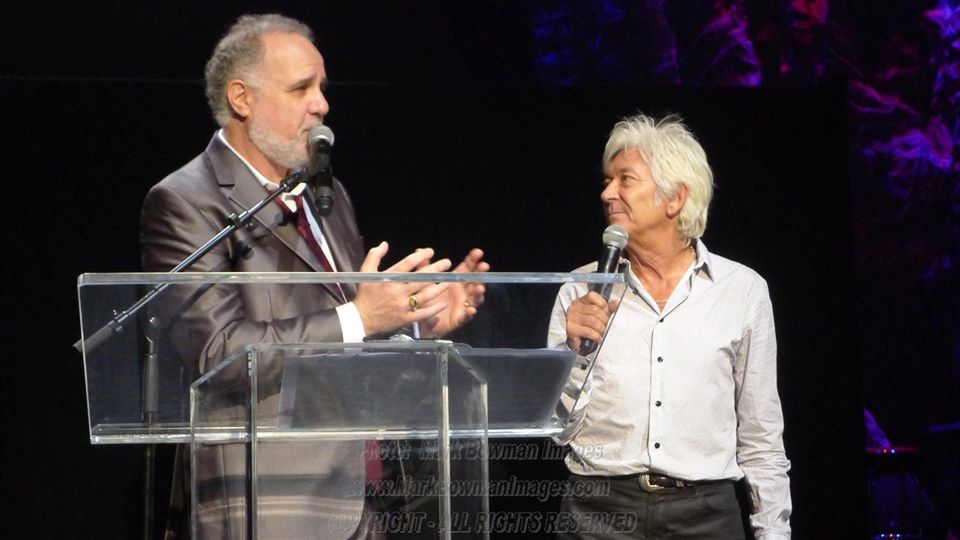 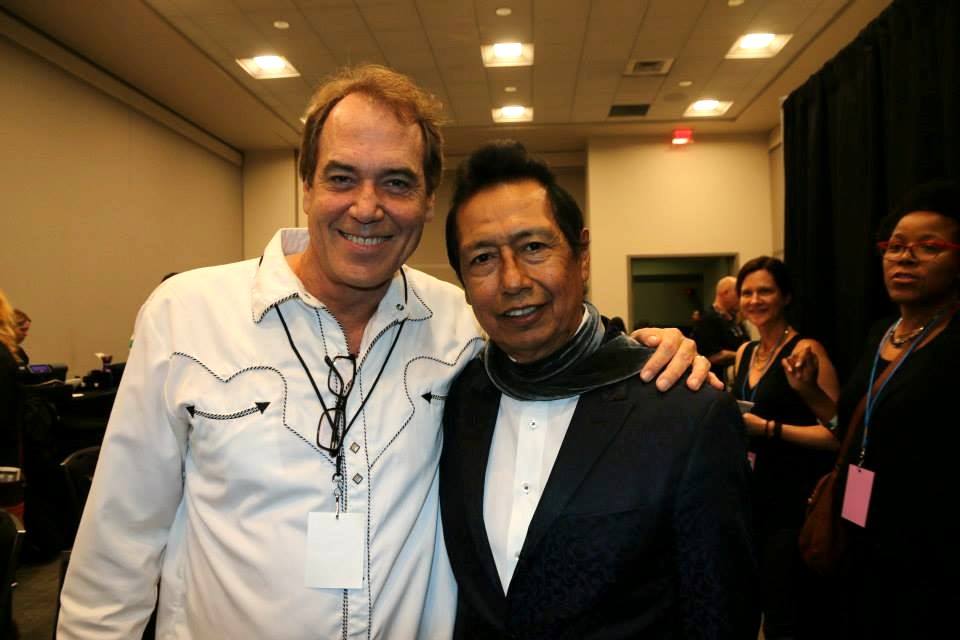 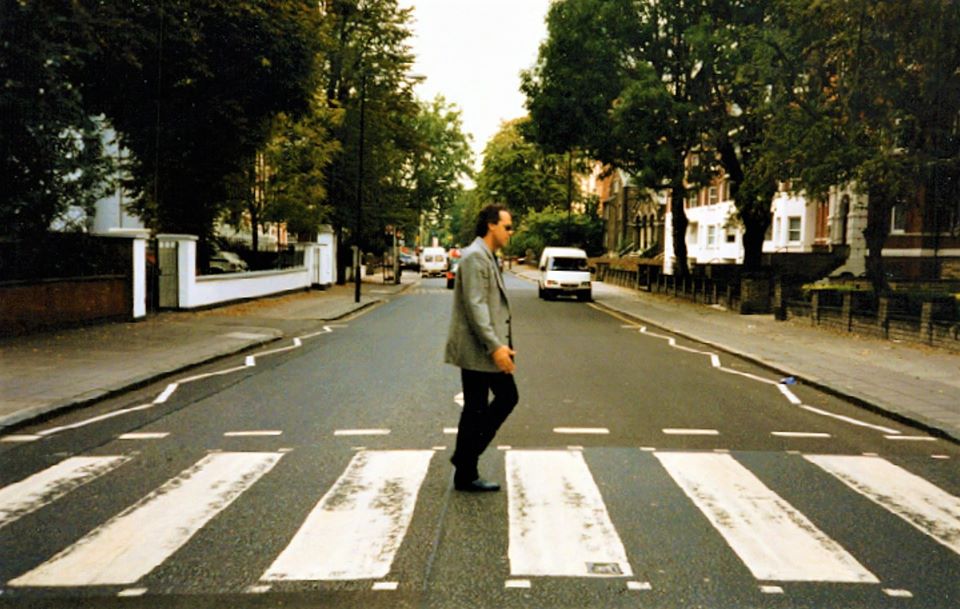