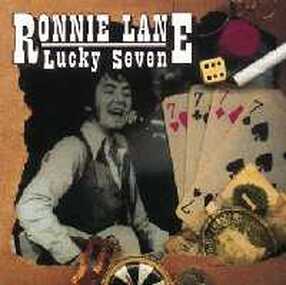 Quite a good collection of late Ronnie's rare stuff: out-takes and demos recorded in 1977 in a warm company of friends including THE STONES' Ian Stewart, Eric Clapton, Hughie Flint and Lane's cohorts Charlie Hart and Brian Belshaw. The sessions were registered around the time of Ronnie's joint project with Pete Townshend, that resulted in the album titled "Rough Mix". Which it wasn't, of course. And you can say this of these seven blues variations of different tempo.

"Around The World", massively sprinkled with Hart's accordion, is a typical for Lane folky boogie, soft and modest, sung right from the heart. You can easily imagine Rod singing it but with no chance for sincerity like that. Pace's quickened up with "Last Night", obviously a backing track. No vocals supplied, yet, being familiar with the artist's style, one can picture what it could turn out like, chromatic piano and accordion throughout. Deeper and deeper into classic rock'n'roll of 50's with "Annie Had A Baby", which used to be a single for Ronnie that year. Eventually guitars are welcomed to the fore to a certain extent while all the decorations provided by Ian Stewart, a star of the sessions.

A little slower with "Same Day" and you start wondering how such a gentle person as Ronnie could go for rock, a case of rebellion. Elvis was a big influence, that's probably the right answer. Another backing is "Walk On By" boasting of Clapton's guitar. But listen closely and you'll hear the vocals behind the music, caught by the instruments' microphones. Hart's great violin soloing adds a huge country feel to the piece. From that point, it seems Lane was trying to go way back to disintegrate rock'n'roll to its country and boogie elements.

Two last pieces are "Ron's Take" and "Charlie's Take", just sketches showing a brilliant musicianship - especially in the accordion-driven latter played in the Bo Diddley guitar style. So "Lucky Seven" appears to be a valuable addendum to the Lane catalogue - but was the barrel's bottow scraped out for these seven, or was the title good enough to give us that little?
​http://old.dmme.net/reviews/reviews6.html
https://books.google.com/books?id=1d6aAwAAQBAJ&pg=PT193&lpg=PT193&dq=%E2%80%8BRonnie+Lane+-+Lucky+Seven+Album+(1998)&source=bl&ots=zyu1Ot0LjI&sig=ACfU3U29gUVb5BtifYPWyncDZd7yy-u8gQ&hl=en&sa=X&ved=2ahUKEwiK_t2_zsXmAhV-GDQIHb4yCcMQ6AEwEXoECAoQAQ#v=onepage&q=%E2%80%8BRonnie%20Lane%20-%20Lucky%20Seven%20Album%20(1998)&f=false
https://www.discogs.com/Ronnie-Lane-Lucky-Seven/release/12388243
See re-release of Ronnie Lane Lucky Seven Album (2002)
​Ronnie Lane - Lucky Seven Album (2000)
​AllMusic Review by William Ruhlmann
The British NMC label has been delving into Ronnie Lane's recorded archives to assemble a series of posthumous albums, and this one is a miscellany. The main portion of it is the last seven tracks (tracks ten through 16), which are drawn from sessions recorded in July 1977 intended for an album that emerged eventually as Lane's final solo album, See Me (1980). Lane was accompanied by his friend Eric Clapton on the sessions, and the two eventually aborted the recordings and went on tour instead. The four tracks before those (Tracks six through nine) are performances by a late Lane ensemble from May 1981 called Ronnie Lane's Big Dipper and include re-recordings of songs from Lane's Faces days, "Debris" and "Stone." The first five tracks are demos, live versions, and alternate takes of Small Faces ("All or Nothing"), Faces ("Ooh La La"), and Lane solo ("The Poacher," "How Come," "Anymore for Anymore") songs. So, while some of Lane's better compositions are featured, this is really a collection of outtakes and rehearsals (no great lost Clapton guitar solos), making it an album for Lane completists.
https://www.allmusic.com/album/lucky-seven-mw0000218285
You Are Here:
​​https://www.ronnielane.com/ronnie-lane-lucky-seven-album-1998.html
Ronnie Lane Complete Album Discography
https://www.ronnielane.com/ronnie-lane-complete-album-discography.html