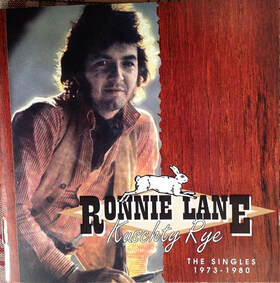 ​​Ronnie Lane - Kuschty Rye - The Singles 1973-1980​ (released 1997)
AllMusic Review by William Ruhlmann
​[-]Ronnie Lane released eight singles in the U.K. between 1973, when he left Faces, to 1980, when his performing career was winding down due to multiple sclerosis, and all the tracks featured on those singles are here. Lane scored two Top 40 hits early on with "How Come" and "The Poacher," and the rest of the material is in a similar style, which will be familiar to anyone who knows the album tracks he wrote and sang with Faces or his work on the Pete Townshend/Ronnie Lane duo album of 1977, Rough Mix. That is to say, Lane works in a British folk-rock style, his arrangements including such instruments as mandolin, Dobro, fiddle, and accordion, and he writes songs that have a bouncy, music hall feel with traces of American country and blues. (Interestingly, just as Lane became too sick to perform, Kevin Rowland adopted an essentially identical style for Dexys Midnight Runners in the early '80s; since Lane's and Rowland's adenoidal tenors are similar, the hit "Come on Eileen" could be dropped onto this disc and fit right in.) Lane's star-crossed career prevented him from achieving the renown he deserved, but this album demonstrates that, at his best and most accessible, he was as effective a singer/songwriter as the many better-known peers who befriended and admired him.
https://www.allmusic.com/album/kuschty-rye-the-singles-1973-1980-mw0000009362
https://www.discogs.com/Ronnie-Lane-Kuschty-Rye-The-Singles-1973-1980/master/731037
https://www.discogs.com/Ronnie-Lane-Kuschty-Rye-The-Singles-1973-1980/release/5489978
You Are Here:
https://www.ronnielane.com/ronnie-lane-kuschty-rye-the-singles-1973-1980-released-1997.html
Ronnie Lane Complete Album Discography
​​https://www.ronnielane.com/ronnie-lane-complete-album-discography.html