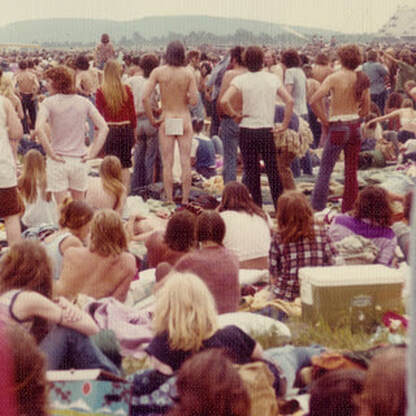 Faces - July 8 and 9, 1972 Concert 10 Mount Pocono International Raceway, Long Pond, PA USA -Photo ©1972 David P. Cannon
​https://cannonverse.blogspot.com/2009/12/before-and-after-woodstock.html
Many Many Fantastic Comments
​https://1001-songs.blogspot.com/2012/07/40-year-itch-pouring-at-pocono.html
From the Desk of Michael Allsup, guitarist of Three Dog Night
Pennsylvania: July 8, 1972 - The Pocono Pop Festival
He DID, however, know which road it was on. Solution? Pull out a road map and fly low. Following the road, looking for road signs advertising the Holiday Inn. We couldn't have been more than 75' over the flow of traffic, flying like crazy down the highway. I was sitting up front with the pilot. Ultimately, we DID see a sign that said 1 mile to the Holiday Inn. We landed in the parking lot and would (much later) take the copter to the Pocono Speedway for the concert. As I recall, weather caused slow turnover time between bands and the rain made it unsafe to perform. The concert went way into the night. In fact, we didn't go on until about 6 or 7 in the morning. There was a sea of people that "stayed the course" and spent the entire night camping there. Kind of a "Woodstock" feel to it. A huge audience.
If you notice some handwriting on the article, that would be my mother's writing. It says "July 8th - Mike's group." This was an article from a newspaper that I found in her "keepsake" stuff. Aren't moms wonderful?
http://www.michaelallsup.com/12ch_11.htm
Shades of a Lost Festival​
https://thjkoc.net/2012/08/29/shades-of-a-lost-festival/​ with fantastic comment section
​But even when promoters legitimately contracted with tracks, locals often rebelled. In the days before the Concert 10 Festival, with roads already jammed and law enforcement stretched thin by flooding in the area, the Pennsylvania State Police suggested getting an injunction against it. The local DA said, essentially, “On what grounds?,” and the festival went forward. Nevertheless, many locals believed the festival could have, and should have, been stopped. Days afterward, a columnist in the Stroudsburg Pocono Record blasted county officials for failing to do so. Two years earlier, local authorities had killed a six-day festival scheduled for nearby Walpack, New Jersey, not long after a festival scheduled for a ski resort near Middlefield, Connecticut, was halted by injunction. The columnist refused to accept the county’s assertion that authorities didn’t learn about the festival in time to act, and he blamed racetrack owners for wanting a big payday to salve ongoing financial trouble. A couple of weeks after the festival, the local paper denounced as censorship a proposed county ordinance that would have granted officials the power to decide whether a festival was “good” for the area. (When one of them suggested an injunction against a Johnny Cash show scheduled for the racetrack in August, locals disagreed loudly.)
​My original post (NOT FOUND) describes the scene on concert day—the hellacious traffic, the open sale of drugs, the garbage left behind, and the horrified reaction of locals. That post has attracted some interesting tidbits from readers who claim to have been there. One says, “I have no idea who said drugs were for sale. It’s simply not true.” In that case, the local paper reported it. He also says, “I heard through the crowd that five babies were born.” This is almost certainly nonsense—Woodstock was twice as large and three days longer, and although there were rumors of births at that show, nobody has ever been able to prove anybody was born there.
“When it rained, the Groundhogs were on stage. They played until their amps caught fire.” Perhaps. “Emerson Lake and Palmer began at about 3AM Saturday with ‘Fanfare for the Common Man.'” Doubtful: Given that ELP was in the midst of the massive world tour later documented on Welcome Back My Friends to the Show That Never Ends, it’s more likely they opened with another Aaron Copland number, “Hoedown.”
​My research named the following acts on the bill: Three Dog Night (who closed the show), Rod Stewart, ELP, Humble Pie, Black Sabbath, the J. Geils Band, Badfinger, and Edgar Winter, although one commenter says neither Black Sabbath nor Badfinger played, and another says he remembers Mountain there. (Newspapers were notoriously bad about listing rock festival lineups in their reporting.) There were undoubtedly other, lesser bands on the bill; the Groundhogs and Mother Night are two we know of. A number of concertgoers remember less about the music than they do about the looting of an ice-cream truck, the traffic jam before and after, and the muddy conditions.
The last mentions of the Concert 10 Festival in the local paper are at the end of July, when the traffic chaos it brought was contrasted with the smooth operation of two auto racing events that brought massive crowds to the raceway three weeks later. Never mind that an auto race is not a rock festival and a rock festival is not an auto race. The Pennsylvania 500 and Schaefer 500 races on back-to-back days proved to the locals that they could run a big event, if the hippies would get out of the way.
​And with that, the Concert 10 Festival faded into history.
https://en.wikipedia.org/wiki/Long_Pond,_Pennsylvania
Concert 10 NOT noted here ​https://en.wikipedia.org/wiki/Pocono_Raceway
You Are Here:
​​Faces Concert July 8 and 9, 1972 - Concert 10 ​- Mount Pocono International Raceway, Long Pond, PA USA
https://www.ronnielane.com/faces-concert-july-8-and-9-1972-concert-10-mount-pocono-international-raceway-long-pond-pa-usa.html
​Faces Concert Tour Dates With Ronnie Lane Master Page
https://www.ronnielane.com/faces-concert-tour-dates-with-ronnie-lane-master-page.html
​Ronnie Lane Complete Album Discography
​https://www.ronnielane.com/ronnie-lane-complete-album-discography.html