Text is a bit hard to read. Putting this on the long list of Ronnie Lane album inserts that need transcription!
Click on each image to open in a separate window
Concerts For The People of Kampuchea - Wiki
History
The album starts with four songs from the Who (culled from a 3-hour set list) and finishes with three songs from Wings and three from the all-star line-up called Rockestra. The best of the concerts was released as a film, Concert for Kampuchea.
Rockestra was a Paul McCartney-led supergroup of at least thirty English rockers. The credited list appears at the bottom of the back cover of the LP. The name was first given to an assemblage of famous rock stars that were brought together by McCartney for the final Wings album, 1979's Back to the Egg. The supergroup – which consisted of Wings, John Paul Jones and John Bonham of Led Zeppelin, David Gilmour from Pink Floyd, Ronnie Lane of the Faces, Kenney Jones and Pete Townshend of the Who, and Hank Marvin of the Shadows – recorded two McCartney compositions, the instrumental "Rockestra Theme" and "So Glad to See You Here".
Then, McCartney and Kurt Waldheim re-assembled Rockestra for a series of benefit concerts for the people of Cambodia (also known as Kampuchea), suffering from the reign of Pol Pot. This time, Rockestra consisted of, among others, Wings, John Paul Jones, Bonham, Robert Plant, Rockpile, James Honeyman-Scott and Townshend. Hank Marvin was not available and Gilmour for tax reasons had to decline, as he was with the rest of Pink Floyd in Los Angeles, California, where they were in the midst of rehearsing for an upcoming concert tour for the just released Pink Floyd album The Wall.
Concerts For Kampuchea - Rockestra Personnel
Ronnie Lane and Rockestra played for the Concerts For The People Of Kampuchea a three song ENCORE!
Rockestra - Personnel
Various ‎– Concerts For The People Of Kampuchea  - Track List
(Atlantic, 2xLP US Club Edition, 1981)
Watch full movie: Rock For Kampuchea (1979)
1:27:28
Original upload with comments
Ronnie Lane with Paul McCartney & Rockestra - Video
Ronnie Lane and Rockestra played for the Concerts For The People Of Kampuchea a three song ENCORE!​
Ronnie Lane with Paul McCartney & Rockestra videos originally found at
https://www.youtube.com/user/KeepUnderCover/search?query=Rockestra
"Rockestra Theme"
the fourth and final single on Wings' final studio album Back to the Egg.
Recording:
It was recorded on 3 October 1978 at Abbey Road Studios by an all-star collection of musicians dubbed "Rockestra", although the song is technically credited to Wings. It was recorded as part of Wings' 1979 album Back to the Egg and released as a single in France.
One person taken out of the Rockestra supergroup was Jeff Beck. After being asked to join by McCartney, Beck wanted to be able to have veto power over his own guitar parts, subsequently, McCartney withdrew his invitation.
In a 2001 interview on VH1, McCartney said Keith Moon was to have taken part in "Rockestra" but died one month before the recording sessions took place. Kenney Jones, who replaced Moon on drums within The Who, appeared instead. In the book Paul McCartney: Recording Sessions (1969–2013) Wings' drummer Steve Holley recalled the session in an interview, saying "it was daunting".[2]
Live​:
The song was performed again at the Concerts for the People of Kampuchea and released on the album and EP of the same name. This was a series of concerts featuring Queen, The Clash, the Pretenders, The Who, Elvis Costello, Wings, and many more artists which took place at the Hammersmith Odeon in London, England during December 1979 to raise money for the victims of war-torn Cambodia. The event was organized by McCartney and Kurt Waldheim, and it involved older artists such as McCartney and The Who as well as younger new wave acts like The Clash and the Pretenders. The last of the concerts was the last concert of Wings.
​Most of the Rockestra wore silver suits for this performance. On the Concerts for Kampuchea home video, McCartney can be heard making a comment about Townshend before playing the song, making reference to Townshend being a "poof" (gay in British slang). "Thank you, Peter. Only lousy sod who wouldn't wear the silver suit. Cuz he's a poof." Townshend made comment about it in several interviews following the performance.
Juber can be seen walking up behind Townshend after McCartney's comment, and placing a silver top hat on his head. Townshend quickly grabs the hat and flings it into the audience.
​"Rockestra Theme" won the 1980 Grammy Award for Best Rock Instrumental Performance.[3]
In France it was used as the opening theme of 'Chlorophylle' a pop-rock program on the radio station Europe1.
https://en.wikipedia.org/wiki/Rockestra_Theme
Paul McCartney’s “Rockestra!” The Last “Wings” Single – In France!
​First New Grammy! Macca Rocks Kampuchea!
https://johnrieber.com/2016/11/02/paul-mccartneys-rockestra-the-last-wings-single-first-new-grammy-macca-rocks-kampuchea/
BY JOHNRIEBER on NOVEMBER 2, 2016​
Paul McCartney’s One Time Only Supergroup – Macca’s “Rockestra!”
The event was organized by McCartney and Kurt Waldheim, and it raised a ton of money – and more importantly awareness – for the war-town country. 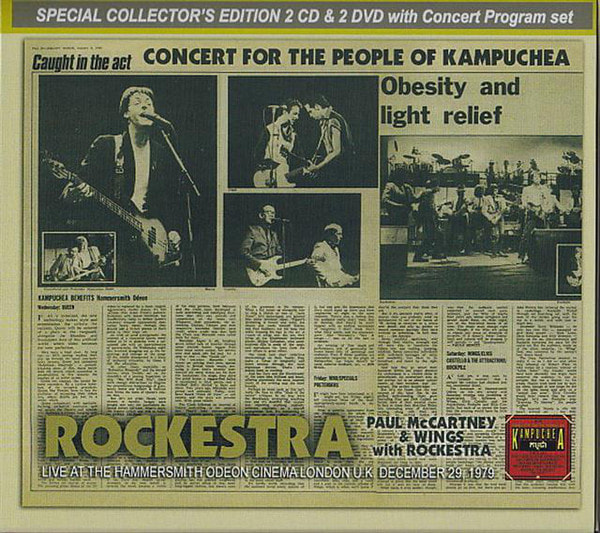 Concerts For Kampucia - newspaper advert
​These concerts helped raise money for a great cause, and the concert and album was a great success. It was however, the last time that Wings would perform live.
Polish That “Silver Wear”!
Most of the Rockestra wore silver suits for this performance – except for Pete Townsend, who decided not to – you can see him standing out on the live performance – because he’s the one without the Silver Coat!
​The Song Gets Grammy Gold!
The live version of “Rockestra Theme” is terrific, and it is always great to see musicians taking part in good causes like this. Even though the song wasn’t a hit single – only released that way in France, “Rockestra Theme” won the first Grammy for Best Rock Instrumental Performance.
Paul McCartney Rockestra TV Special, with generous views of Abbey Road Studios, circa 1978
Air Date: currently unknown
Length: 42:35
Wings - Back To The Egg Album (1979)
http://www.jpgr.co.uk/pctc257.html
Back To The Egg needs its own page...
3rd October 1978 at Abbey Road (between 10:30 and 18:30),
"Rockestra Theme" and "So Glad To See You Here" are recorded which are also filmed and edited into a 40 minute programme.
https://en.wikipedia.org/wiki/Back_to_the_Egg
https://johnrieber.com/2015/09/30/paul-mccartneys-cracked-back-to-the-egg-the-all-star-rockestra-band-a-musical-farewell-to-wings/
Read all about the chaotic events that led to this masterpiece here:
https://johnrieber.com/2016/05/01/band-on-the-run-paul-mccartneys-triumph-over-adversity-classic-chaos-creation/
https://www.discogs.com/Various-Concerts-For-The-People-Of-Kampuchea/master/68676
https://en.wikipedia.org/wiki/Concerts_for_the_People_of_Kampuchea_(album)
Video- https://en.wikipedia.org/wiki/Concert_for_Kampuchea
Full Set Lists- ​https://en.wikipedia.org/wiki/Concerts_for_the_People_of_Kampuchea
​https://www.the-paulmccartney-project.com/album/concert-for-kampuchea/
​https://www.the-paulmccartney-project.com/concert/1979-12-29/
You Are Here:
https://www.ronnielane.com/concerts-for-the-people-of-kampuchea-ronnie-lane-rockestra-1979-video-appearance-1981-album-release.html
Ronnie Lane Complete Album Discography
https://www.ronnielane.com/ronnie-lane-complete-album-discography.html