(This page is an ongoing collection of historical anecdotes)
Ronnie Lane and The Outcasts
Ronnie Lane's first band, The Outcasts.
This was in 1964, a whole year before the Small Faces were formed.
Ronnie at the time was the 17 year old East End Mod,
taking lead vocals on a couple of self penned songs that have never seen the light.
​https://store.cdbaby.com/cd/ronnielane2 (link not available 3/2021)
Ronnie Lane & The Outcasts ~ 1964, a modern beat group!
From the Desk of John Hellier ~ "The Holy Grail"
“About 20 years ago a guy called George Cambridge contacted me out of blue and told me that he used to be in a band with Ronnie Lane and Kenney Jones called The Outcasts. This was in 1964, a whole year before the Small Faces were formed. I was interested, of course, to hear what he had to say and went to visit him at his house near Southend on Sea. We spent a fabulous couple of hours chatting about The Outcasts and just before I left he quite casually said “Hey I’ve still got a reel of tape from one of our rehearsal sessions in my Mums house in the East End”. WHAT!!!!!! “Yeah, it’s just been in a drawer for the last 36 years, I can’t even play it as I haven’t got a reel to reel player anymore”. He very kindly let me take it away and I took it to a specialist shop that transferred the contents to CD for me. This was in 1996. He assured me that nobody outside of his house would have ever heard it, not even Ronnie and the other band members. Can you just imagine how I felt whilst putting the CD into the player for the first time. My expectations were fulfilled 500 times over! There was the 17 year old East End Mod taking lead vocals on a Bo Diddley cover complete with wailing harmonica and also a couple of self penned songs that have never seen the light. I played it a few times and then just left it myself safely in a drawer…… until now. There is also light hearted banter between songs and although it’s obviously got a very amateur-ish feel to it, it also has a charm all of it’s own. For Ronnie Lane/Small Faces/Faces fans the world over this is surely THE HOLY GRAIL.
http://ronnielanestory.co.uk/ ​(John Helleir website)
Kenney Jones on The Outcasts
Ronnie Lane was born in 1946 in East London. Kenny Jones knew him from the time he left school and was working as a plumber's mate to pay for his guitar. "We got together and started a band called The Outcasts." When Lane decided to switch from guitar to bass he and Jones went to a local music shop in search of a new instrument. "This cocky little guy served us and he turned out to be Steve Marriott," recalled Jones.
The pair invited Marriott to a pub gig that night and when he got up on stage he jumped all over the pub's piano, breaking the keys. "The landlord threw us out, the group broke up and we ended up with just me, Ronnie and Steve sitting on our equipment on the pavement. We looked at each other and burst out laughing, and that was the birth of the Small Faces. If I hadn't met Ronnie Lane first the band wouldn't have happened."
​https://www.independent.co.uk/news/people/obituary-ronnie-lane-1254389.html
Listen to Ronnie Lane & The Outcasts on Spotify
https://open.spotify.com/album/1DFfMXtoOn6tSLsxV1n6Bz 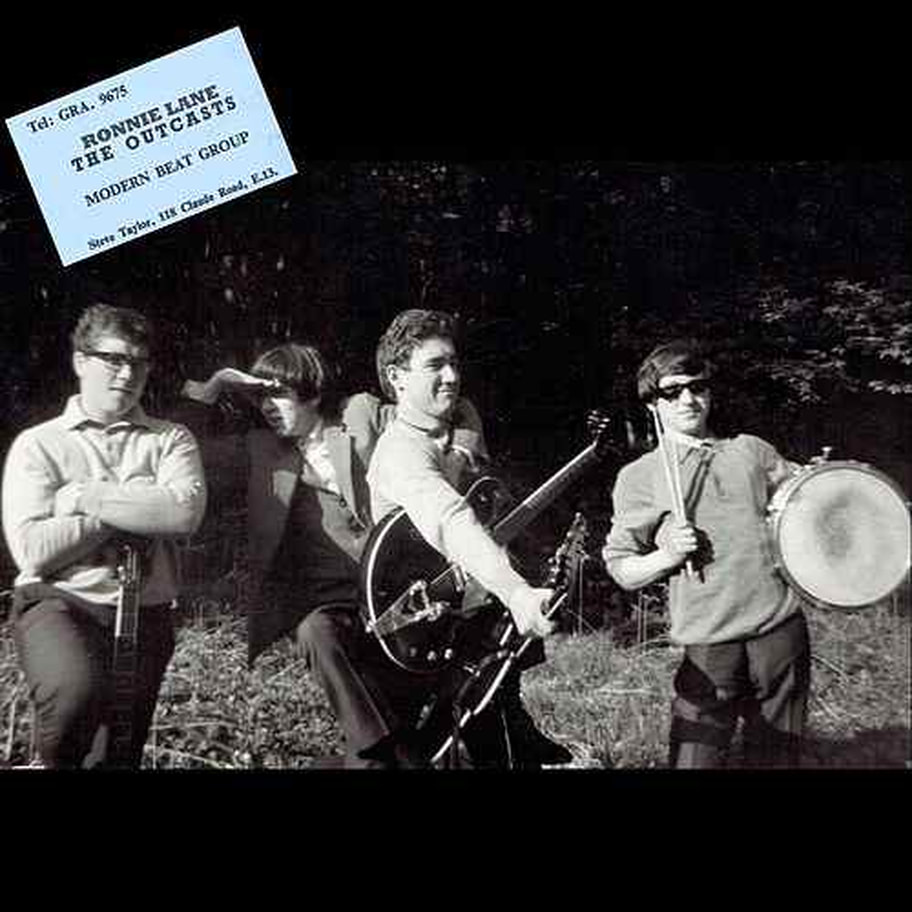