Ronnie Lane And Slim Chance The Passing Show Tour Bus:
As of January 2021 this bus has been SOLD!

Ronnie and Eric Clapton playing the Drum And Monkey in Shropshire in 1977 (Image credit: Rex)
Ronnie was about to turn a corner in his life. He had left his first wife, Sue, and had taken up with a woman named Kate Lambert, who was into the world of travelers and carts, and the gypsy lifestyle, so he was going down a road already familiar to me from hanging with the Ormsby-Gore clan. I was immediately interested, particularly since I’d always known that we had a lot in common and that sooner or later we’d probably get together. They parked their bus outside the house and stayed with us for a while. They told us that they had bought a hundred-acre farm on the Welsh borders, called Fishpool, and were living there with a motley group of musicians and friends. It caught me like a bug, and I couldn’t wait to go up and visit them. 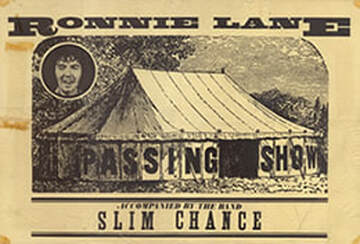 My fascination with the life that Ronnie described to me went back to something I had been exposed to a little bit with Steve Winwood when he was forming Traffic and I was forming Cream, and we had discussed the philosophy of what we wanted to do. Steve had said that for him it was all about unskilled labor, where you just played with your friends and fit the music around that. It was the opposite of virtuosity, and it rang a bell with me because I was trying so hard to escape the pseudo-virtuoso image I had helped create for myself.
Nell and I started to go and visit Ronnie and Kate in Wales. We’d just show up and blend in, and although there wasn’t a lot of room in the cottage, it didn’t seem to matter. I loved hanging out with Ronnie because we were both drinkers, and as we spent more time together, Ronnie’s musicality also began to rub off on me. Just like him, I was going through a very different period in my music. I’d been aware of J. J. Cale, and I was getting increasingly interested in country music and making music just for fun. I remember we once chartered a boat and sailed around the Med, and did a few shows off the boat in places like Ibiza and Barcelona. The band consisted of Ronnie and me, Charlie Hart on violin, Bruce Rowlands on drums, and Brian Belshaw on bass, and we’d sometimes set up on the quay and play like buskers while Nell and Kate would dress up in cancan outfits and dance. It was a complete fiasco and we certainly didn’t make any money, but it was a lot of fun. On another occasion, St. Valentine’s Day 1977, we played a secret gig at the Village Hall in Cranleigh, a village near Hurtwood, under the name of Eddie Earthquake and the Tremors. We did songs like “Alberta” and “Goodnight Irene,” and encouraged the audience of locals to dance and join in the singing.

What it was about, for me, was drinking and escaping my responsibilities as a bandleader, so I could just hang out and play for sheer enjoyment, and the music reflected this. Very homespun and mostly acoustic, it was in just this spirit that the song “Wonderful Tonight” was written. I wrote the words for this song one night at Hurtwood while I was waiting for Nell to get dressed to go out to dinner. We had a busy social life at that time, and Nell was invariably late getting ready. I was downstairs, waiting, playing the guitar to kill time. Eventually I got fed up and went upstairs to the bedroom, where she was still deciding what to wear.
I remember telling her, “Look, you look wonderful, okay? Please don’t change again. We must go or we’ll be late.” It was the classic domestic situation; I was ready and she wasn’t. I went back downstairs to my guitar, and the words of the song just came out very quickly. They were written in about ten minutes, and actually written in anger and frustration. I wasn’t that enamored with it as a song. It was just a ditty, as far as I was concerned, that I could just as easily have thrown away. The first time I played it was around the campfire up at Ronnie’s, when I was playing it for Nell, and playing it for Ronnie, too, and he liked it. I remember thinking, “I suppose I’d better keep this.”
“Wonderful Tonight” ended up on the album Slowhand, the first record I cut with Glyn Johns as producer, in the spring of 1977. " ~Eric Clapton
Catch more views of this famous bus at the
The Passing Show: The Life & Music of Ronnie Lane DVD documentary page
Produced and Directed by Rupert Williams and James Mackie
​https://www.loudersound.com/features/ronnie-lane-s-escape-to-the-country
You Are Here:
Ronnie Lane And Slim Chance The Passing Show Tour Bus​
​​https://www.ronnielane.com/ronnie-lane-and-slim-chance-the-passing-show-tour-bus.html
The Passing Show: The Life And Music Of Ronnie Lane
​​https://www.ronnielane.com/the-passing-show-the-life-and-music-of-ronnie-lane-2006-film-video-dvd.html