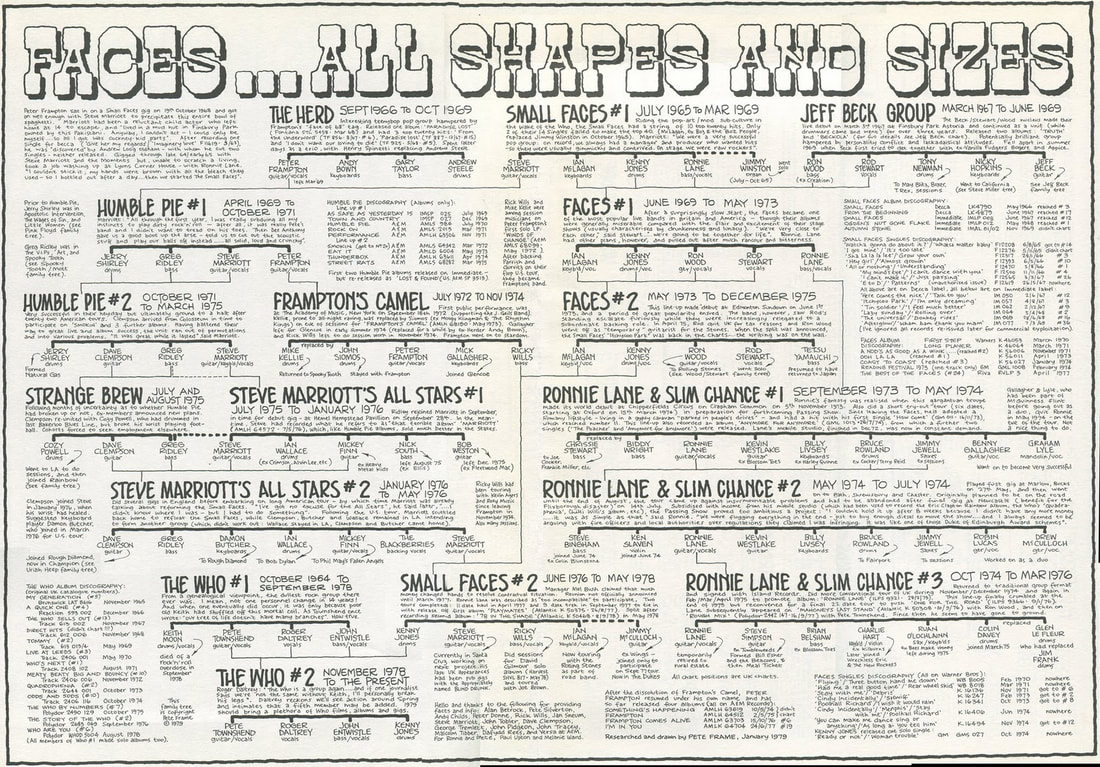 Pete Frame - Small Faces Faces Slim Chance All Shapes and Sizes - Rock Family Tree Poster - Ronnie Lane Chart Tour History
Click on image to open in larger window,
​then click anywhere on the image you'd like to read and the image will get even larger!
This family tree is copyright Pete Frame 1979
To purchase ​https://rockfamilytrees.co.uk/faces-all-shapes-and-sizes-1966-1979/
Faces...All Shapes And Sizes - Pete Frame Rock Family Tree Poster
​- TRANSCRIBED
​Text has been separated into additional paragraphs, for easier reading.
Peter Frampton sat in on a Small Faces gig 19th October 1968 and got on well enough with Steve Marriott to precipitate this entire bowl of spaghetti.
Marriott had been a reluctant child actor who left home at 14 to escape, and "lived in a mud hut in Finsbury Park owned by this Pakistani. Anyway, I couldn't act - I could only be myself ..... so all I got was cockney-kid parts".
After recording one single for Decca ("Give Her My Regards"/"Imaginery Love" (check typo) (F11619 3/1963), he was discovered by Andrew Loog Oldham - with whom he cut two singles - neither released.
Gigged through late 1964/early 1965 with Steve Marriott and The Moments but, unable to scratch a living, took a job washing up at Lyons Corner House - with Ronnie Lane. "I couldn't stick it, my hands went brown with all the bleach they used - so I bottled out after a day......then we started The Small Faces
~The above story contradicts that Ronnie Lane and Steve Marriott first met at a music/instrument shop?
THE HERD (September 1966 to October 1969) - Peter Frampton
SMALL FACES #1 (July 1965 to March 1969)
JEFF BECK GROUP (March 1967 to June 1969)
-This section will be re-visited later to add details
FACES #1 (June 1969 to May 1973)
FACES #2 (May 1973 to December 1975)
-This section will be re-visited later to add details
RONNIE LANE AND SLIM CHANCE #1 (September 1973 to May 1974)
RONNIE LANE AND SLIM CHANCE #2 (May 1974 to July 1974)
RONNIE LANE AND SLIM CHANCE #3 (October 1974 to March 1976)
SMALL FACES #2 (June 1976 to May 1978)
-This section will be re-visited later to add details
https://rockfamilytrees.co.uk/faces-all-shapes-and-sizes-1966-1979/
You Are Here:
Faces All Shapes and Sizes Pete Frame Rock Family Tree
​https://www.ronnielane.com/faces-all-shapes-and-sizes-pete-frame-rock-family-tree.html​
​Ronnie Lane Complete Album Discography
https://www.ronnielane.com/ronnie-lane-complete-album-discography.html
​